When we went to New York City last week, I hoped to be able to see a show at a club or some kind of concert venue. Figured I’d dive right in on my first trip there.

So I poked around and found a few promising shows. Raul Malo playing a harbor cruise. Marlena Shaw at a jazz club. Kelly Willis at another place. All good gigs, but nothing that really blew us away. So we decided to hang loose. Because we did, we found something even better.

On Thursday morning, our first full day in the city, we picked up one of the free papers. There, I saw a listing of the day’s events, and I could scarcely believe our good fortune.

There it was: Sharon Jones and the Dap-Kings, playing a free show that night in Battery Park as part of a summer concert series. All you had to do was show up and ask for tickets.

Sharon Jones may be the best soul singer working today. She’s another of those singers who, though small in stature, has a big voice. (That’s her in our photo, wearing white, facing stage left, in front of the tower second from right.) Her performance was energetic, light-hearted, playful, intense and joyous. That it was a hot, steamy night didn’t seem to bother her a bit.

The Dap-Kings may be the best backing band working today. A tight, funky, soulful eight-piece group with a fine horn section, they also backed Amy Winehouse on her recent tour of the States.

They’re not likely to play our corner of Wisconsin anytime soon, if ever, so it was a no-brainer. To say we enjoyed it is an understatement. It was terrific.

Sharon Jones’ story, if you’re new to her: She was born in Augusta, Georgia, the home of James Brown. She started singing in church, then moved to Brooklyn as a teenager and was a backup singer for soul, funk, gospel and disco sessions. In the ’80s, singing took a back seat to working as a corrections officer. Rediscovered while singing in church in 1996, she worked first with New York soul/funk label Desco Records. Since 2002, she’s been with the Dap-Kings on Brooklyn soul/funk label Daptone Records. Their third full-length record, “100 Days, 100 Nights,” comes out this fall. 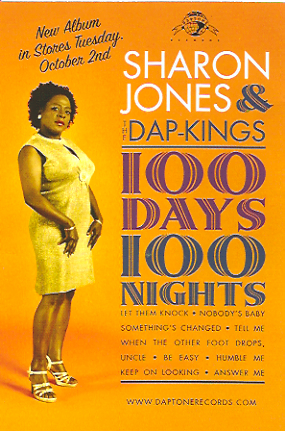 Having heard most of their first two albums, and now having heard a couple of cuts off the new album and having enjoyed their sizzling live performance, I can’t wait for Oct. 2. Hope you’ll enjoy the soul and funk of Sharon Jones and the Dap-Kings as much as I have. 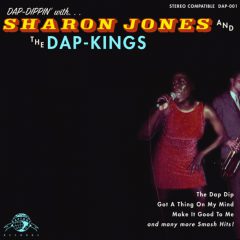