Last month, undecided about whether to go see Alice Cooper when he came to town, I wrote a post about that. I confessed that I’d passed on previous opportunities to see Alice, saying I was just a casual fan. Still, the consensus was that I should go. So I went last night.

I have to be honest with you. It was one of the most disappointing shows I’ve seen in a long time.

Please don’t think I was naive about what I was going to see. Horror chiller thriller theater combined with hard rock. That it was. And, yes, it did have its moments, but not enough of them.

They played most everything you’d want to hear, so no complaints there. 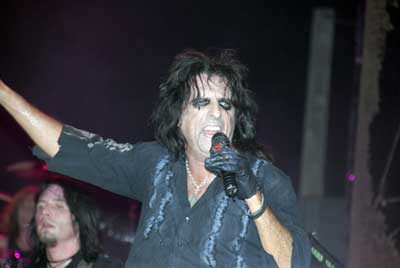 Alice was OK, but it’s hard to buy his stage persona when he’s so otherwise intent on selling himself as nice guy, family man, golf fanatic, radio host, businessman. (Gene Simmons has the same problem these days.)

The rest of the band played with lots of energy, but the guitarists seemed in tune for only the first half of the show. If not that, then the sound mix left something to be desired.

The problem may be that Alice’s albums often are so lushly produced, so lushly orchestrated, that it’s impossible to reproduce that sound on the live stage with just two guitarists, a bassist and a drummer. The live show lacks the nuances of the albums, the quiet moments that give the shocks more sudden impact. Then again, that may be on purpose, old tunes given a new interpretation I really don’t dig.

After last month’s post, Willie left a comment that he’d seen Alice do an all-request show with no costumes or theatrics.

I’d rather have seen that show.

Easily the most disturbing thing was this: Anytime there was make-believe violence of any kind on stage, a young guy off to my left went absolutely ape shit. I don’t want to know what’s in that guy’s head.

Easily the scariest thing was this: One of our local TV anchors, wearing a biker’s black cutoff T-shirt, jeans and pointy-toed boots.

6 responses to “I’m (no longer) Eighteen”