The toilet paper is in the trees in the neighborhood this week, and that means only one thing: It’s homecoming week at Green Bay East High School.

Sure enough, the Red Devils went out on Friday night and smoked their crosstown rivals, the Green Bay West Wildcats, 42-7. It was the 102nd time those teams have played. A little history there, eh?

Tonight, I’ll be having a little homecoming, too. I’ll be heading over to the outskirts of Wausau, Wisconsin, as my high school class celebrates everyone’s 50th birthday. Call it a 32-year reunion if you want, but it’s an excellent idea any way you cut it.

If we get around to talking about the bands we remember from our high school days, these names may come up. Unless you were of a certain age in the mid-’70s and lived in Wisconsin, you probably haven’t heard of them.

One was Dr. Bop and the Headliners, a ’50s revival show band out of Madison, Wisconsin. (If you remember them, check out this story and this story about them. They ran in a Madison newspaper in 2005 after the death of Mike Riegel, who was Dr. Bop. There’s even a three-part slide show — old posters, publicity stills and photos set to music — on YouTube. Here, here and here. It’s a wistful tribute to Riegel.)

Another was Circus, a blues-rock band out of Stevens Point, Wisconsin.

Still another was Clicker, an eclectic rock band also out of Madison.

They were apples and oranges, really. Dr. Bop and the Headliners wore suits. Circus and Clicker were rockers, locked in a battle for regional airplay. For some absurd reason, it seemed important at the time that you pick one over the other: Circus or Clicker.

When Clicker recorded its self-titled album in 1973, it was a five-piece band — bassist Steve Tracy, drummer Jerry Tracy, guitarists Bob Schmidtke and Dick Wiegel and singer Mark Everist. They wrote all eight tunes, recorded them at American Music in tiny Sauk City, Wisconsin, and released “Clicker” on Hemisphere Records out of Madison.

The album was an interesting mix of tunes and influences — a little ’60s rock, a little ’70s folk, a little prog, a little classical — with three instrumentals. The last cut, “Du Monde’s Back Room,” was a live studio jam that ran almost 16 minutes.

Though Clicker played a lot of gigs, they didn’t get much airplay.

That changed two years later. Clicker was back with a new three-man lineup — the Tracys and new guitarist “Memphis” Johnny Briggs — a new sound and a new album. The richer, horn-backed arrangements on “Har De Har Har” replaced the guitar-driven tunes of the first album. Some of the orchestration was arranged and conducted by David (Lewis) Crosby, who at the time led the Wisconsin Chamber Orchestra.

It worked. Clicker started getting airplay on a single, “Tennessee Tailspin.”

Of all the guys who played in Clicker, only Wiegel — now Richard Wiegel — turns up in any web searches. He’s a veteran of the Madison music scene, now leading a band called The Midwesterners. It has released three albums. He also has released a solo acoustic blues CD.

I remember seeing the three-piece Clicker at a gig in Wausau in what I think was the fall of 1975. It wasn’t long thereafter that you didn’t hear anything more about or from them. Perhaps they unraveled again.

There’s almost nothing about Clicker on the web. Their albums, long out of print, are rare. They go for about $100 each on eBay and from online record sellers.

Until last night, I probably hadn’t listened to my Clicker albums in their entirety in 30 years. I still can’t tell you who they sound like. You be the judge, then let me know whether you’d like to hear more Clicker. 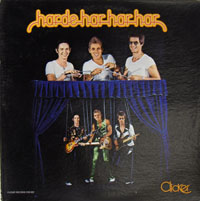