If you dug our last offering over at The Midnight Tracker, there’s more.

We’ve added Side 2 of the soundtrack to “Where the Buffalo Roam,” the 1980 film starring Bill Murray as gonzo journalist Hunter S. Thompson.

This round features Neil Young, Bob Dylan, the Four Tops, Creedence Clearwater Revival and Jimi Hendrix. It starts with an odd little bit of film dialogue from Murray.

The original Midnight Tracker post with Side 1 is here.

As we sat on the patio at our friends’ cottage up north earlier this week, our hostess told us about her $300 list. That is, acts she’d pay $300 to see. Her list includes Elton John, Paul McCartney, Tom Jones and Stevie Wonder.

But taking our family of three to see Stevie Wonder at Milwaukee’s Summerfest on Thursday night came close. Add gas and food, and it topped $300. As did our trip to Iowa last month to see Neil Sedaka.

Our friend has her $300 list. I have a list of bands I’d travel to see. But now that it costs $50 just to fill the gas tank, I’m starting to think such road trips might be coming to an end.

We don’t often travel to see a show, either. Over the last 30 years, we’ve traveled only to see acts not likely to stop in our corner of Wisconsin. That short list: Jimmy Buffett, Joe Jackson, Tina Turner, KISS, AC/DC, the Eagles, Queen with Paul Rodgers, and now Neil Sedaka and Stevie Wonder. Each one was well worth the time and money.

But with that money becoming increasingly tight, we’ll be staying …

This terrific album was released 38 years ago this summer, with this cut dropped as a single in July of that year.

In the summer, in Wisconsin, everyone goes up north.

Up north, to cottages that sit under tall pines along the lake.

We sat outside our friends’ cottage near Phillips, Wisconsin, after sunset Wednesday night, the tunes wafting softly from an oldies CD they’d popped in. It sounded a little like FM sound waves originally transmitted in June 1975 had finally arrived at their destination.

That kind of vibe is going around Phillips these days. We read in the Phillips Bee that the rock ‘n’ roll heard there in the ’60s, ’70s and ’80s will be heard again next week. Guys who played in local bands back then are reuniting for what they’re calling the “Mid-Life Crisis Tour,” a benefit for the high school’s alumni association.

Just one of their stories: Dale Houdek was a long-haired college freshman when he joined Bridge, a local band, in 1966 or 1967. Bridge was to have played a gig at Phillips High School. However, the principal didn’t like Houdek’s long hair. He wouldn’t get it cut, so Bridge was banned from the school. These days, Houdek is the principal at Phillips Elementary School.

Sounds a little like Pat McDonald. You may remember him from Timbuk 3, the husband-and-wife duo that did “The Future’s So Bright (I Gotta Wear Shades)” in 1986. He’s one of our locals. Pat got kicked out of Green Bay West High School in 1969 for having long hair. His parents sued the school board and won. (A great story recounted here.)

Which brings us to Larry O, our host at the cottage. Like Pat McDonald, he’s spent lots of time around Door County, another corner of up north in Wisconsin. As we drove up, Larry popped in a CD. It sounded a little like the Byrds, a little like Neil Young, a little like America, a little like CSN&Y. The band’s name: Dead Miners Union.

Turns out Larry O was in Dead Miners Union when it played gigs around Door County in the early ’90s. These days, one of Larry’s old bandmates has taken the name to Arizona, formed a new band and continues to record as Dead Miners Union.

Larry O encouraged me to check ’em out, so I did. Perfect for a summer night up north. Listen to a couple of cuts, then go get the album for yourself if you’re so inclined.

Death won’t silence George Carlin. That, for those of us who remain, is a good thing.

We’ll always have his intelligence, his irreverence and his outrage, all preserved on the media of the moment.

Word that he’d passed didn’t strike me as particularly surprising. His health had seemed precarious in recent years. Perhaps I noticed it more because he canceled a show we’d planned to see a couple of years ago. We never did get to see him.

George Carlin always summons some bittersweet memories. I grew up watching Johnny Carson with my dad in the late ’60s and early ’70s. Some fathers and sons play catch. We watched Carson.

When Carlin’s routines veered from the mainstream to the counterculture, Dad no longer thought Carlin was all that funny. It was partly a generational thing, and partly Dad’s naivete about comedy. (For example, Dad also was dismayed to find out Buddy Hackett cleaned up a rather foul-mouthed routine for all those Carson appearances.)

The problem was, I found Carlin plenty amusing. Then along came Richard Pryor, whom I found even more amusing. And that is how fathers and sons start to grow apart, or at least how sons start to become their own man.

There’s more Pryor than Carlin in my collection, and I’ve always been on the lookout for more Pryor, not more Carlin.

Perhaps I should rethink that. There always are copies of “Class Clown” and “FM and AM” in the dollar bins at our local used record store. Perhaps I should get them and introduce Carlin to our 13-year-old son. After all, I was younger than that when George Carlin started influencing my sense of humor.

Here, then, is a classic Carlin bit that’s acceptable to Dad, appropriate for Evan and one of my faves:

“Baseball-Football,” George Carlin, from “An Evening with Wally Lando,” 1975.

We used to play a little game as we sat in The Hose’s living room, quaffing Hamm’s beer and watching basketball on a tiny black-and-white TV. We’d pick up the paper and check out the daily list of celebrity birthdays. 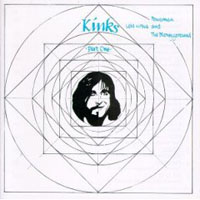 Ray Davies of the Kinks. I’ve never really been into the Kinks, but I do like this album:

“Apeman,” the Kinks, from “Lola Versus Powerman and the Moneygoround, Part One,” 1970. (You’ve heard the fabulous “Lola” enough. Here’s the single that followed “Lola.” Its notion of fleeing modern society holds up pretty well almost 40 years later. Ray Davies wrote both tunes.) 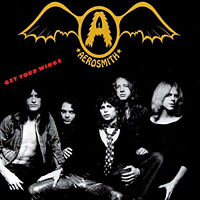 Aerosmith drummer Joey Kramer, who co-wrote this song (which Evan may find on Guitar Hero: Aerosmith some day). 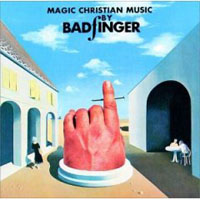 Joe Molland of Badfinger, who played guitar on this, the terrific B side to the “Come and Get It” single, which I had when I was 12:

“Rock of All Ages,” Badfinger, from “Magic Christian Music,” 1970. (Thanks to the gents over at Popdose for posting this a couple of months ago.) 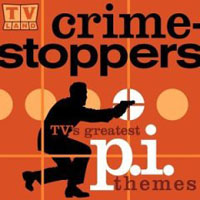 Lalo Schifrin, who composed several memorable TV themes, including this one:

“Mannix,” Lalo Schifrin, 1967, from “Crime Stoppers: TV’s Greatest P.I. Themes,” a 2000 CD compilation that’s out of print. (This is the long version, with an extra minute you may not have heard.)

I included today’s Dave Edmunds tune on one of the mixtapes I made for our wedding reception 21 years ago.

It may have been one of the tunes that prompted Aunt June to ask whether we had anything other than “that cowboy music.” I guess Dave’s twanging guitars sounded like “cowboy music.”

If I had it to do over, perhaps we’d hire a band. But we had so many albums, even in 1987, that making a few mixtapes made some sense.

Perhaps you have a wedding this summer. Perhaps your bride used to rock ‘n’ roll. If so, you might want this one, written by Nick Lowe.

Dave handles all the vocals and most of the instruments on this album, with a little help from his pals in Rockpile, particularly Lowe on bass and Terry Williams on drums. I can’t say who’s on this cut, though. The liner notes aren’t that specific.

Another day at Ray’s Corner

Longtime readers know we occasionally stop by Ray’s Corner to listen to tunes spirited from my dad’s music collection.

So we’re back there on this Father’s Day, which this year follows Dad’s birthday by exactly one day. Dad turned 83 yesterday. He doesn’t get around too well anymore, but he’s still sharp.

Here, then, are a couple of tunes you might hear at Ray’s Corner. It’s the apartment with the loud music, and the place where the martinis are made of gin with the vermouth bottle held about a foot away.

They’re kind of laid back. Perfect for a lazy summer Sunday.

Dad was 31, and he and Mom had probably just learned I was on the way when this album was released in January 1957. It really is the wildest! It’s mostly swing, jazz and blues, but you can see rock and roll in the distance.

Dad was 25, still a single guy, when this tune hit the charts in August 1950. He was working as the agent at the Railway Express Agency office in the depot in his hometown of Elroy, Wisconsin. He was living at home, but you can be sure he got out and heard this tune on the jukeboxes of the day.