Nothing, and I mean nothing, got my pal Herb more agitated than hearing Peter Frampton played like clockwork over the speakers at the pool where he worked during the summer of 1976.

The singles from “Frampton Comes Alive” were all over the radio that summer. You couldn’t escape them. Especially if you were a captive audience, as Herb was. He sat in that lifeguard’s chair day after day, hearing Frampton every two hours or so.

Herb would be so disappointed in me.

I went to see Frampton play at the fair earlier tonight. He was outstanding (as was his tight four-man backing band).

If you have a chance to see Frampton, go, even if you think you’ve had your legal limit of all those old hits. His summer tour goes through mid-September.

Frampton good-naturedly sized up a modest crowd, suggesting that everyone in Seymour, Wisconsin — the home of the Outagamie County Fair — was on hand. Doubtful. Seymour’s population is 3,335. Maybe 2,500 people turned out for Frampton in a venue that holds 6,500. Several hundred folks sat in the more distant grandstand rather than stand with the rest of us on the race track. Those of us who stood on the track got close to the stage. Real close.

Some of the highlights: Covers of “Shotgun” and “Signed, Sealed, Delivered (I’m Yours)” to open the show and “While My Guitar Gently Weeps” to close the encore. The less-often-heard “All I Wanna Be (Is By Your Side)” and “I’ll Give You Money.” Even though I’ve heard “Do You Feel Like We Do” a million times, it was pretty exciting to see and hear it played live, talk box noodling and all.

And, yes, the ladies still dig Peter Frampton. It seemed just like prom night in front of the stage as one couple — perhaps still in their 30s — slow-danced to “Baby I Love Your Way.”

After finishing “Signed, Sealed, Delivered,” Frampton promised his new album would explore the Motown sound. He also did back-to-back-to-back tunes from “Fingerprints,” his 2006 instrumental album. They were so good, I bought the CD after the show. Gotta support those artists, you know. (I don’t have anything else by Frampton, by the way.)

I’d forgotten that I’d heard Frampton’s cover of the following tune before, but it was a killer when seen and heard live. 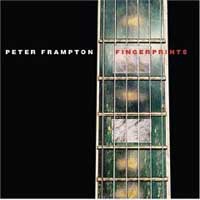