Shaft and the paper boy

Peering far into the distance on this Vinyl Record Day, this is how a vinyl record collection starts.

You are 14 and just beginning ninth grade. Your constant companion after school is the Top 40 AM radio of the day, as cranked out on WOKY, The Mighty 92, out of Milwaukee.

One day in the early fall of 1971, your mind is blown by a driving mix of high-hat drums, gritty wah-wah guitar, elegantly orchestrated horns and strings, a deep baritone lead vocal and angelic backup vocals.

It is, of course, “Theme from Shaft,” by Isaac Hayes.

So I took some of my paper route money, went downtown to Prange’s, went down to the record department in the basement and bought the soundtrack to “Shaft” by Isaac Hayes.

Every note, every nuance of “Shaft” was seared into memory, and is still there. You get to know your albums intimately when you have only four.

At the time, “Shaft” sat next to Neil Diamond’s “Tap Root Manuscript,” Creedence Clearwater Revival’s “Green River” and “The Best of Bill Cosby” on the shelf in my bedroom. I played those four records over and over, committing them to memory, getting the grooves down.

“Shaft” had the most groove, of course. So much so that I envisioned it as the music I’d play if I ever got some time alone with a certain girl. In the fall of 1971, that was just a 14-year-old’s wishful thinking, and that is exactly what it remained.

The sophistication I never got to express to that certain girl instead helped shape my record collection. The soul, R&B and jazz on the four sides of “Shaft” introduced me to those genres in ways the Top 40 did not, forging some eclectic tastes that remain to this day.

I’d like to say I continued to buy funk, soul and R&B albums that were every bit as adventurous as “Shaft” seemed to a 14-year-old. But no.

A couple of months I bought “Shaft,” we moved to another part of Wisconsin. I left behind Top 40 AM radio and moved on to free-form FM radio. What I learned of funk, soul and R&B after that was what hit the charts and got daytime radio play, or whatever I heard in the clubs, which in central Wisconsin in the mid-’70s was much the same.

Now I’m trying to make up for lost time. As I go crate digging, I’m most often looking for funk, soul and R&B records I should have bought long ago. I look for, but rarely find, anything by Isaac Hayes. In our once-all-too-white corner of Wisconsin, few people bought funk, soul and R&B albums when they came out. That makes them hard to find today.

Last Friday afternoon, a younger gent and I were looking for similar things as we dug through boxes of dollar records in a tent in the back yard of one of our local record sellers. It already had been a big day for me, with records by Curtis Mayfield and MFSB in my stack. The other gent had records by Marvin Gaye and Earl Klugh.

Then I noticed he’d added the “Shaft” soundtrack to his stack. Those same four sides by Isaac Hayes. I’d been through that box before him, saw “Shaft” and thought: “There’s something you never see.”

“You familiar with that?” I asked him.

I took that to mean he knows “Theme from Shaft.”

“That was one of the first records I ever bought when I was a kid.”

“Shaft” has moved 10 times with me since 1971, and it’s still sitting here in the office, just behind me.

“Shaft” was the first album I wrote about here at AM, Then FM.

Please enjoy a couple of tunes from “Shaft.” Lord knows I have. 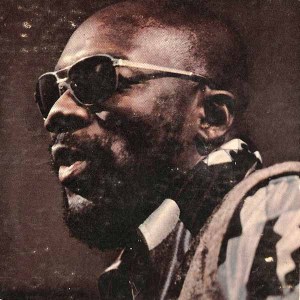 3 responses to “Shaft and the paper boy”