Nothing to worry about

One of the highlights of last weekend’s trip to Duluth, Minnesota, was stopping in at Electric Fetus, an remarkably old-school record store.

Last year, our then-12-year-old son explored a display case full of bongs and pipes. This year, he explored the case again, curious about rolling papers. This year, he also tried on some natty hats. Yes, Evan is growing up, no longer the little boy you see above.

Two Jerry Reed albums were among my haul from the used vinyl downstairs. I was greatly relieved to read the back cover on one, 1971’s “When You’re Hot, You’re Hot.”

Then only 21 and still a fairly green reporter, I wrote that I’d found Reed intensely focused as he prepared for his show, anything but relaxed. When you’ve been writing for as long as I have, you dread digging out 30-year-old stories. Did I get it right, I wonder?

“He has always worried, this Georgia boy the whole world now claims as its native son, but in his worrying he has relieved the worries of a great many people. … The only thing that worries his friends is how come it took the rest of the world so long to find out.”

Intense, focused … and, yeah, worried. Good thing, too. It brought us these tunes, both from albums found downstairs at Electric Fetus.

“Ko-Ko Joe,” Jerry Reed, from “The Best of Jerry Reed,” 1971. More country-funk guitar from the 1971 album of the same name. Both are out of print, but this cut is available on “The Essential Jerry Reed,” a 1995 CD compilation. 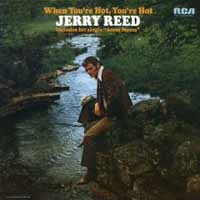 Mel Tillis wrote it. Kenny Rogers and the First Edition had a hit with it. Lots of people have covered it.

2 responses to “Nothing to worry about”