While working out at the Y earlier today, the reading material was the current issue of Entertainment Weekly.

Johnny Depp is on the cover, in character as John Dillinger for a film to be released this summer. That film — “Public Enemies” — was shot in several locations in Wisconsin last fall. The Depp cover, of course, was a tease for a story on this year’s must-see films.

Among those films is the remake of a 1974 classic — “The Taking of Pelham One Two Three,” which starred Walter Matthau as a New York subway cop chasing Robert Shaw, the leader of a gang of subway hijackers. The new version has Denzel Washington in the Matthau role and John Travolta in the Shaw role.

Because everything must be new, I won’t be surprised if David Shire’s terrific theme from the 1974 film is redone for the remake. Hollywood is not good with the notion of “if it ain’t broke, don’t fix it.”

As always, you be the judge when the time comes.

Until then, enjoy the 1974 trailer, which has a little of Shire’s classic theme. Both are gritty, hard-edged, hard-hitting, full of attitude. 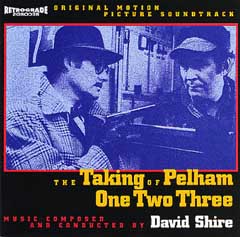 “The Taking of Pelham One Two Three,” David Shire, 1974, from “Mojo: The Score,” a compilation of film themes included with the June 2002 issue of Mojo magazine. The movie soundtrack has been released on CD, but is out of print.