We’re starting to wind down on NXMW 2009, the little festival celebrating music from our corner of America.

We’ve had new stuff and old stuff, and tonight it’s more of the old stuff. This one is special.

If you’re a regular reader of AM, Then FM, you know we occasionally champion the cause of Clicker, a much-loved rock/glam/cover/show band that played throughout Wisconsin in the ’70s.

Often requested — especially by our friend Shark, who grew up in southwestern Wisconsin around some of the guys from Clicker — is this tune from Clicker’s first album, released in 1973.

It’s a long, trippy instrumental jam, clocking in at 15:22. The first minute and 40 seconds is a spoken intro, with guitarist Bob Schmidtke explaining that it’s about “a sinister pile of masonry,” a massage parlor with “a terrible reputation,” experienced only by the band’s drummer. It’s one of those tales you file under “Good Story If True.”

“Since none of us have been there and our drummer, whose name you’ll conveniently find somewhere on the album jacket, is still too shaken up to talk about it, this tune is pure conjecture. It’s in rondo sonata allegro form and features tricky parts by all.”

Dig it, if you dare. It used to freak me out, especially if I listened to it late at night after partaking in too much … ah, never mind. 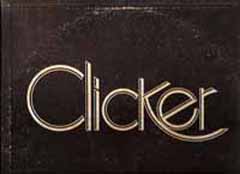 “Du Monde’s Back Room,” Clicker, from “Clicker,” 1973. It’s out of print. This tune was written by Schmidtke, brothers Steve and Jerry Tracy (the bass player and drummer, respectively) and guitarist Dick Wiegel.

Be sure to check out the comments, where Shark and Bill describe what it was like to see and hear “Du Monde’s Back Room” played live.