I dig fireworks, and this is what I think about as I watch:

That would be a great way to go out. Take my ashes, put them in a shell and fire them into the sky, where they explode in a riot of colors. My family thinks I’m kidding.

It came to mind last week, not only while watching fireworks, but as I learned about the serious illness of a woman married to a guy who used to work at our paper. Our time together at the paper was brief, and a long time ago. Our paths rarely crossed. I doubt he remembers me.

My old colleague has kept an online journal about his wife’s illness. A mutual friend pointed it out, and it’s remarkable.

My old colleague writes of his wife’s passion for Warren Zevon’s music, especially over the last year or so. Zevon, after all, kept writing and recording new songs even after learning he had a short time to live.

Her favorite song: “Keep Me In Your Heart,” the last cut on Zevon’s last album, “The Wind.” In it, the dying Zevon gently coaches his family and friends on how to remember him after he’s gone.

My old colleague, more of a Springsteen guy, has come around, saying “there’s something about Springsteen singing a Zevon song that comforts me these days.”

Especially Springsteen’s cover of “My Ride’s Here” on “Enjoy Every Sandwich,” a 2004 tribute album to Zevon. My old colleague described that song as done by someone “after a life on the road, stuck in yet another hotel and knowing his time had just about run out.” 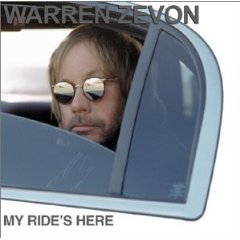 At the end of that journal entry, titled “My Ride’s (Almost) Here,” my old colleague writes:

“Everybody knows that moment at a party where it’s time to leave, but you linger a bit, savoring the moment and the experience. That’s what (she’s) doing right now — she’s lingering and savoring.”

She died the next day.

“Keep Me In Your Heart,” Warren Zevon, from “The Wind,” 2003. Also available digitally.

I haven’t named my old colleague and his wife because I don’t know them well enough to feel comfortable doing so. I never met her.

Their online journal was hosted by CaringBridge.org, which provides a place for families and friends to connect during times of serious illness. If you ever find yourself in such a situation, CaringBridge web sites are highly recommended.

It was just a short news story, but it instantly reminded me where I was 30 years ago this weekend. I was in Cleveland, on the first leg of the adventure of a lifetime.

That’s overstating it, of course, but when you’re 21 and traveling alone for the first time, it seems that way. That you’re seeing the grittier side of America from a bus certainly adds to the experience.

So as my college classes ended in May 1979, I talked my bosses at the newspaper into giving me a few days off.

I bought a sleeping bag, packed a backpack, borrowed a camera and took off.

I drove to southern Wisconsin, stayed overnight at my aunt’s house and caught a bus to Chicago. There, in a vaguely scary bus station, I caught another Greyhound and headed east.

When we reached Cleveland, a huge, double-deck headline in the Plain Dealer screamed about a plane crash in Chicago in which 273 people had been killed. It was — and still is — the worst crash involving a single plane in U.S. history. That’s why it was in the news today.

Going across New York state, I chatted with a young woman. All was well until she tried to convert me to her brand of religion. No thanks.

My plan, once I got off the bus in Cooperstown, was to camp out for a couple of nights. But it had been raining since Albany and never let up. I never saw the top of any mountain in the Catskills, thanks to the low-hanging rain clouds. So I found a room in a cheap motel and spent a couple of rain-soaked days in Cooperstown.

Of course, the sun was out as I sat outside Clancy’s Deli in Cooperstown, savoring my first New York deli sandwich and waiting for the Trailways bus on the first leg of the trip home.

Going across Ohio, I chatted with a younger guy, maybe 18 or so, who spun a breathless tale of working with or being mentored by the singer Johnny Mathis. I probably said something like “Johnny Mathis, eh?”

He misread my skepticism about his story and immediately sought to reassure me that although he had worked with the singer, he himself certainly was not gay, no sir, no way. He needn’t have worried. I was clueless. I never would have thought that had he not mentioned it.

Here’s a road song from one of the records I was listening to at the time.

It’s written and sung by Duncan Cameron, a guitarist who joined the group a year earlier. That’s Joan Baez on the background vocals. Not quite Memphis soul, not quite country, it’s still a good cut from an underrated album.

Here, finally, is another installment in our rather occasional series about Dave Edmunds, the Welsh guitarist, pub rocker and roots revivalist who long has been one of our faves.

Dave teamed up with Nick Lowe to write today’s tune. They started working together in 1975, when Lowe played bass on Dave’s second solo album, “Subtle As A Flying Mallet.”

They started writing together on Dave’s third solo album, which was released two years later. Two of the songs on”Get It” are by Edmunds and Lowe. Two others were written solely by Lowe.

Edmunds, Lowe and drummer Terry Williams played together for the first time on “Get It,” shaping that glorious Rockpile sound.

We’re going outside to play now.

Confined to quarters after a minor medical procedure (I’m fine, thanks), I decided to spend the afternoon ripping some old albums.

The top shelf was easiest to search for goodies, so — for no apparent reason — I started with my old Creedence Clearwater Revival records.

Creedence was one of my earliest faves, but I long ago grew tired of hearing all their hit singles over and over. These days, I listen to the Creedence tunes less often heard.

Even though I pulled out those old Creedence albums, I had no intention of writing about them today. Until later, that is, after I got caught up on my blog reading. There, on LiveDaily.com, was news that two repackaged Creedence releases go on sale next week. I had no idea.

What Fantasy Records has done on “Creedence Covers the Classics” is pretty much what I did this afternoon: Mined the first five Creedence albums for songs you might dig.

Some of those covers are pretty good. Turns out I ripped seven of them this afternoon. Knowing they’re being re-released in this manner has sapped my enthusiasm for writing anything further about them.

Instead, here are a couple of less-often-heard goodies from Creedence. Both are written by John Fogerty and show his sly sense of humor.

“It Came Out Of The Sky,” Creedence Clearwater Revival, from “Willy and the Poor Boys,” 1969. In which a UFO lands south of Moline and the Establishment freaks out. Fogerty gleefully sticks it to The Man. 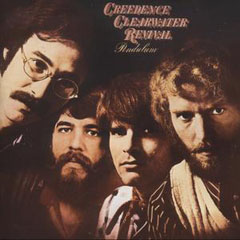 “Molina,” Creedence Clearwater Revival, from “Pendulum,” 1970. In which the mayor’s daughter is a wild child. That’s Fogerty on electric piano and sax. Don’t be fooled by the false ending, either.

It used to be that you never needed to ask that question, at least not back when radio was more diverse. But that was a long time ago.

Much of what’s written about here comes from that time — the ’60s to the ’80s — but I haven’t given up on finding and digging new sounds.

It’s harder to find that next great thing, but I keep looking and listening. I don’t want to be one of those crabby old farts who keeps saying everything was better back then. Because that just isn’t so.

I recently was sent an advance copy of the new album by Carbon Leaf, an alt-rock band from Richmond, Virginia. Even though they’ve been around for 17 years and eight albums, I wasn’t familiar with them or with most of the bands cited as their peers.

But I gave it a few spins. Though their publicists talked up several cuts, a different one hit home with me. And that’s all you can ask for, really.

Turns out even the five young guys who collaborate on everything in Carbon Leaf have wistful memories of summers gone by.

Save for the melting of Boba Fett in one verse, this tune is about the summers of my youth. I used to live there, too.

It’s the first memorable song of my summer.