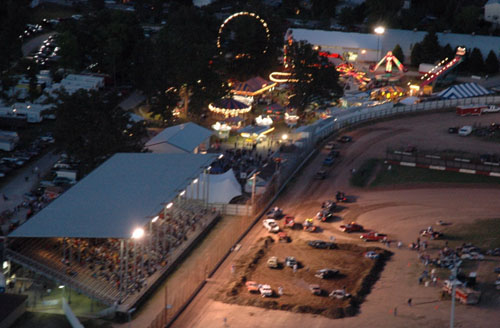 It’s been a dry summer in our corner of Wisconsin, and not only for the crops. There haven’t been many must-see shows.

However, you see the Grass Roots listed as the headlining act at the Kewaunee County Fair — barely a half-hour’s drive away — and you know you’re going to be there.

Then you wonder. What will that be like, some 40 years on? You dig around and learn that the only original member still with the group is lead singer Rob Grill. Then a friend says: “I heard he had brain surgery.” Then you wonder whether the backing band is any good.

The Grass Roots, with Grill singing lead and playing bass, and backed by a tight three-piece band, are doing just fine some 40 years on. Grill, guitarist Dusty Hanvey, keyboard man Larry Nelson and drummer Joe Dougherty have been together for 25 years now, far longer than the original lineup. Their sound is everything you’d hope for.

For a 65-year-old man who needed brain surgery after hitting his head in a fall, and who then had to go through physical rehab because of it, and who also has been slowed by a knee injury, Grill is doing all right.

They played everything you’d hope to hear, plus covers of “Don’t Pull Your Love” by Hamilton, Joe Frank and Reynolds — a song originally intended for the Grass Roots — along with “Love Grows (Where My Rosemary Goes)” by Edison Lighthouse and “Drift Away” by Dobie Gray.

Rain left a small lake right in front of the midway stage, so about 2,000 of us made do.

We filled the area from the Holy Rosary Parish food stand (with dining room!) back to the Farm Bureau and FFA Alumni food stands and back down to the American Legion food and beer stand. Even with the demo derby going on at the same time next door, in front of the grandstand.

My clothes reek of deep-fried cheese curds (which are delicious). I was standing in front of the Legion stand, in prime position to hear …

Among other great tunes. These two are off “The Grass Roots: Their 16 Greatest Hits,” 1971, which is out of print.

Single-CD compilations include this 2003 import and this entry in the Millenium Collection/20th Century Masters series.