The storm is starting.

For now, the snow is light, dusting our yard and our streets. We’re expected to get at least a foot of snow by the time the storm ends tomorrow night.

So, we’d better put three under the tree before the snow gets too deep. 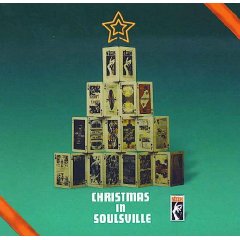 “Winter Snow,” Isaac Hayes, 1970, from “Christmas in Soulsville,” 2007. On which Mr. Hayes is bummed out, having encountered a former lover with “lips so warm and a heart as cold as a winter snow.” It’s the B side to “The Mistletoe and Me,” his Christmas single from that year. The CD is a fine compilation of Stax Christmas tunes from the ’60s and ’70s.

“Winter (Basse Dance),” Blackmore’s Night, from “Winter Carols,” 2006. On which Ritchie Blackmore, the former Deep Purple and Rainbow guitarist, proves he’s indeed a Renaissance man. This is a graceful, elegant instrumental. It’s a bit like the John Fahey tunes sampled in Vol. 37.

“In Like A Lion (Always Winter),” Relient K, from “Let It Snow, Baby … Let It Reindeer,” 2007. On which you think the kids might be learning a few things from Jackson Browne. It’s not really a Christmas or holiday tune, and certainly not Relient K’s familiar pop-punk, but rather a laid-back, reverent reflection on winter and hope.

We’ll save “Winter Wonderland” for another day. It’s rarely a wonderland when you have to shovel it just so you can get into the driveway when you come home from work late at night.