Echoes on a plane

We were on the plane to Savannah last week. It was the first trip for the iPod.

Having cranked up the volume to drown out the engine noise, it was an opportunity to listen to songs more closely than you typically would. It brought one of those revelations you get when you have that kind of an opportunity.

This song came along in the shuffle play. 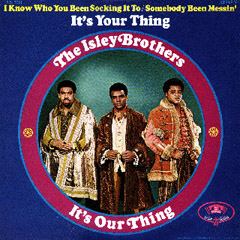 Now hold on. There’s another song that goes like that. You may remember it.

“What’s He Got,” the Producers, from “The Producers,” 1981. It’s out of print and apparently not available digitally, either.

It’s not a cover, and the music is power pop rather than soul, but this Atlanta group covered much the same ground.

I vividly remember this from the early days of MTV, but was surprised to learn it did nothing in the charts.

The Producers were such MTV faves — “Certain Kind Of Girl” and “She Sheila” also were popular videos — that they headlined the network’s second New Year’s Rockin’ Eve at Radio City Music Hall in New York as 1981 turned to 1982.

Lead singer Kyle Henderson, it turns out, has lived just down the road in Madison, Wisconsin, for the past four years. He’s an editor at the University of Wisconsin and teaches at a junior college.

He also leads a group called Kyle Henderson’s Blue Eyed Soul. They do soul and blues covers and originals. And, yes, “What’s He Got” is on their song list.

However, “He’s Got Your Love” is not.

4 responses to “Echoes on a plane”