What we’re gonna do right here is go back. Way back. Back into time. When the only way we were going to be introduced to the Jimmy Castor Bunch, at least as teenagers in a small town in central Wisconsin, was via the Top 40 radio.

So we were. As spring turned to summer in 1972, we were digging “Troglodyte (Cave Man),” the fiercest, funkiest novelty single any of us had ever heard.

Indeed, for a long time, it was the only Jimmy Castor song we knew.

Many years passed, and one day I found my way to a place called Funky 16 Corners. There, my new friend Larry from New Jersey introduced me to Jimmy Castor, late ’60s Latin jazz soulster, by way of a couple of instrumentals called “Southern Fried Frijoles” and “Ham Hocks Espanol.” I had no idea.

Nor did I have any idea, honestly, of Castor’s tremendous impact on hip-hop music via the sampling of his ’70s funk. That was the main theme in almost every story I read after his passing late last week.

Yet for all the remarkable range of  Jimmy Castor’s career — from late ’50s doo-wopper to ’60s Latin jazz soulster to ’70s funkster to  ’80s hip-hop inspiration — “Troglodyte” is what I knew best. Which is why I bought a couple of Jimmy Castor Bunch LPs from that era while crate digging. 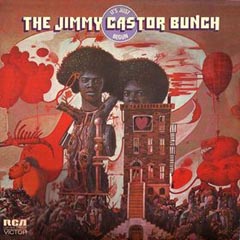 Listening to “It’s Just Begun,” the 1972 LP featuring “Troglodyte,” was a revelation. That record had the entire Jimmy Castor spectrum laid out on its two Dynagroove sides. Yeah, there was funk (his own brand and some inspired by James Brown), but also some R&B, some Latin jazz, some pop (clearly inspired by the band Chicago) and some of his early doo-wop, all bookended by a couple of orchestral pieces

My friend Larry wisely summoned some of that LP’s best grooves in his Jimmy Castor tribute post earlier today. Head over to Funky 16 Corners to listen to the title track and to “L.T.D. (Life, Truth & Death).”

The wide variety of sounds on “It’s Just Begun” also demonstrated the sheer joy brought to the party by the good-natured Castor. Which is why, here, we’ll end as we started — listening with a smile.

“Troglodyte (Cave Man),” the Jimmy Castor Bunch, from “It’s Just Begun,” 1972. The buy link is to an import double CD also featuring “Phase Two,” the LP that followed later in 1972.

The song also is available on “The Best Of The Jimmy Castor Bunch: The Everything Man,” a 1995 compilation that goes heavy on the funk.