Gone in threes, yet here forever

They have gone in threes again this week.

There was Dick Clark. As he did when Don Cornelius passed earlier this year, my friend JB said everything I wanted to say about Dick Clark in his post over at The Hits Just Keep On Comin’. When I heard the news of Clark’s passing and thought of his legacy, I immediately thought Cornelius was more influential.

Duane Dudek of the Milwaukee Journal Sentinel also had a fine piece on Clark, drawn largely from a new book that’s deeply skeptical of Clark’s role in how “American Bandstand” came to be integrated. The headline says it all: “Dick Clark’s TV legacy, including on race, is complicated.”

There was Levon Helm. He holds a singular place in the history of this blog. His PR people are the only ones to ask that a song be taken down in the five years we’ve been doing this. The tune we shared came off a free sampler his record label handed out at Record Store Day three years ago. Go figure.

There was Greg Ham. He was one of the Men At Work, the guy who played flute and sax and keyboards in a group that for a time in the early ’80s was one of the most popular bands in the world. Greg Ham, just 58, was found dead at his home in Melbourne, Australia, on Thursday.

After word spread of Ham’s death, his fans turned to Colin Hay. When you think of Men At Work, he’s the guy who comes to mind, and rightly so. He wrote most of their songs, sang lead on most of them and still performs charmingly reworked versions of them in his solo act.

Men At Work fans crashed Hay’s website while trying to read his statement about his friend’s death.

Greg Ham and Colin Hay were friends for 40 years, having met while seniors in high school. “We shared countless, unbelievably memorable times together,” Hay said. “We played in a band and conquered the world together. I love him very much. He’s a beautiful man.”

Less beautiful was that Ham felt his legacy marred by a copyright lawsuit. An Australian court ruled in 2009 that his memorable flute riff on “Down Under” was cribbed from “Kookaburra,” an Australian nursery rhyme written in the 1930s. Doubt anyone outside Australia hears it that way. You know the riff.

Men At Work put out only three albums. I had the first two — “Business As Usual” and “Cargo” in the early ’80s, then sold them at the end of that decade. Time, it seemed had passed them by.

Then, nine years ago, I discovered “Man @ Work,” a record on which Colin Hay covered some of those old Men At Work songs Hearing them again, it was clear how good those songs were, and are.

You also know Ham’s sax solo on “Who Can It Be Now.” It was, Hay said yesterday, “the rehearsal take. We kept it, that was the one. He’s here forever.”

Greg Ham is here forever, too.

“Be Good Johnny” and “Down By The Sea,” Men At Work, from “Business As Usual,” 1982. It’s out of print but is available digitally. The used vinyl is fairly common. I bought this record and “Cargo” last year for $1 each.

Ham and Hay composed the music for “Be Good Johnny,” and that’s Ham as the adult speaking to the kid.

“Down By The Sea,” composed by Ham, Hay, guitarist Ron Strykert and drummer Jerry Speiser, is the last cut on the album. It’s laid back, but still a bit of showcase for each of them.

One day, Andy and I were sitting in the newsroom, batting around stories about growing up along Lake Michigan, albeit a generation apart. We grew up in the same town, Sheboygan, lived on the same side of town, went to the same grade school, Washington, and had the same teacher, Mr. Metscher.

But as so frequently happens in the newsroom, one of us was called away at just that moment. I never did find out what Andy meant by that. He’s no longer here to explain further. Nor, as of last week, is Mr. Metscher.

Everyone has teachers who made a huge difference in their lives. Bill Metscher was one of mine. In the summer of 1968, I desperately wanted to get into his sixth-grade class and was thrilled to get in. He just seemed like a cool guy.

In August 1968, Bill Metscher had just turned 33. He was a local guy who had gone off to college, gotten a teaching degree and then come back home to work.

He was the first male teacher I’d ever had. He was young and energetic, nothing like any of the women who’d been my teachers before. That — and his occasional cussing, the first of my teachers to do that in class — lit up a bright but shy 11-year-old like a lightning bolt.

I can’t imagine teachers today would build a Valentine’s Day bulletin board and pair off boys and girls, but Mr. Metscher did that. I still remember the girl he put me with. It was Carol Kraft, another bright but shy 11-year-old.

Mr. Metscher and I met again three summers later at the playground he supervised. We’d moved to the other side of town, so he was surprised to see me. I told him I was going to start working on my junior high school paper — the Sabre Star — and at 14 was going to go into journalism. He said he was surprised that a shy kid like me was going into that line of work, but he smiled and seemed pleased. That was all the affirmation I needed.

I wrote Mr. Metscher a letter a few years ago, but never got one in return.  I’d heard, perhaps from Andy, that his health had not been good for some time. His obit seems to confirm that. Bill Metscher was 76 when he died Friday but apparently retired when he was in his late 50s. Gone too soon.

Picking a song from that time is a bit problematic. No music comes to mind when I think of Mr. Metscher. In 1968 and 1969, the only popular music I heard was on TV. I wasn’t listening to the radio yet, except for one summer week spent with my older cousins, driving around and listening to WLS out of Chicago.

So I’ll go with this.

I loved the prelude — it’s a bit like hearing a story from Mr. Metscher — and I’m sure I heard this in the summer of 1969, the summer after sixth grade, as my cousins cruised the circuit with my brother and I stuffed in the back seat.

(The pops and surface noise prove that this vinyl really did come from 1969. It’s part of its charm. It seems appropriate for a song about Atlantis.)

An 18th-century hymn done with soul

Did you know George Harrison wrote “My Sweet Lord” but that Billy Preston recorded it first in 1970?

Neither did I until I read Matthew Bolin’s fine piece, “The 10 Best Cover Songs (You Didn’t Know Were Covers)” over at Popdose earlier tonight.

Not to get all preachy on you, but as I listened, it seemed an appropriate selection for this weekend. It has a nice gospel vibe.

I’m far from knowledgeable about gospel music, and I’m not particularly reverent, but I do enjoy exploring the funk and soul aspects of gospel music.

However, the progressive but predominately white mainstream church we attend rarely explores gospel music, and when it does, it rolls out the same few songs on the same few occasions. Apparently we can dig gospel music only when Martin Luther King Jr. Day draws near. But that is another issue for another day.

Perhaps some day we’ll hear this. It’s been one of my favorites for years. It still delivers chills. 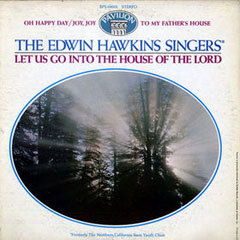 “Oh Happy Day,” the Edwin Hawkins Singers, from “Let Us Go Into The House Of The Lord,” 1968. The LP is out of print, but the song is available digitally. This was recorded live in 1967 at Ephesian Church of God in Christ in Berkeley, California.

Dorothy Combs Morrison is the lead singer. She was in her early 20s at the time. The rest of the Edwin Hawkins Singers also were young, ranging from their late teens to mid-20s.

The LP originally was to be released only locally, but it got a worldwide release after “Oh Happy Day” became a smash on San Francisco radio in 1969.

Did you know “Oh Happy Day” is a reworking of an English hymn that dates to the 18th century? Neither did I. Here’s another version.

“Oh Happy Day,” Aretha Franklin with Mavis Staples, from “One Lord, One Faith, One Baptism,” 1987. This LP also is out of print, but the song is available digitally. This was recorded live at New Bethel Baptist Church in Detroit in late July 1987.

(Curiously, my copy of this song is from “Joy To The World,” a 2006 CD that was marketed as a Christmas release. However, only half of its 10 cuts are Christmas songs. Go figure.)