These are not my guitars, but this is my guitar story.

One of the distinctly Wisconsin ways in which we raise money for our school’s music programs is the brat fry.

We usually camp out in front of the grocery store, fire up the grill, plug in the roasters and fill up the coolers, selling burgers and brats and pop to anyone who comes along. If we’re not working at one, we’re having lunch at one.

So it was last month at the music store run by our band director’s husband. After having downed my brat at their brat fry on that blisteringly hot day, I took momentary refuge inside the air-conditioned store, where visitors were encouraged to sign up for raffle prizes. On my way home from a record-digging trip that afternoon, I learned that I had won a nice Yamaha acoustic guitar.

Our son Evan, who has a gift for talking people into giving him guitars, figured my guitar also would be his. After all, his pal Collin loaned him the guitars you see above. (Not seen is the old amp that also came from Collin.) 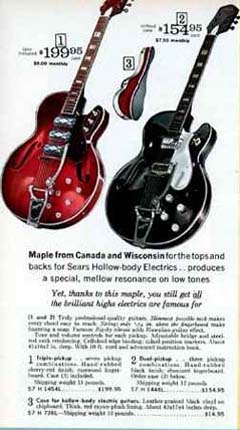 Well, let’s just say my new guitar is on semi-permanent loan while I continue the search for my old guitar.

Back in the ’60s, my dad brought home an electric guitar that had been damaged in shipping. It had a big crack along the side of the body. The customer didn’t want it, and understandably so. (My dad worked for REA Express, sort of like today’s UPS. If a customer declined a shipment, he could put in a claim for it.)

My guitar was red, with a long whammy bar. Even with that big crack, we had a lot of fun with it. That must have been 1966, maybe 1967, back when some older kids who lived up the alley had a garage band.

I’ve been looking for my old guitar for some time now, wading through Google image searches. After all that research, I’m fairly certain it was a 1964 to 1966 Sears Silvertone, a model that apparently was a favorite of garage band guitarists of modest means. I’m not sure it’s the red one in the picture from the 1966 Sears catalog, but that’s as close as I’ve gotten.

We kept that guitar, crack and all, well into the early ’70s. It had to have been around the house in 1973, because I sussed out and cranked out the chords to “Smoke On The Water” like every other 16-year-old.

One day, though, it went out in the trash.

So, yeah, I’ve been thinking about my old red guitar as Evan noodles on his. Maybe someday I’ll find out exactly what kind of guitar I had.

That’s my guitar story. Here’s another.

That’s a song my friend Wally might have liked. Peace, my man.

41 years on, long live the King

I ain’t putting up with this any longer, he must have thought.

The second week of August 1971 in New York was hot and humid, steamy and sultry. Monday, Tuesday, Wednesday, each of those days reached 90 during the day and cooled only into the high 70s at night. The end of the week brought a little relief — 10 or so degrees cooler — but apparently not enough relief.

So Curtis Ousley went out and got himself an air conditioner. As Thursday night turned to Friday morning, he lugged it back to his brownstone apartment at 50 W. 86th St., a long block west of Central Park.

Curtis Ousley — known professionally as King Curtis, the great sax player — and his attacker, one Juan Montanez, wound up at the same hospital. Ousley died an hour later. Montanez survived, only to be arrested, convicted and imprisoned.

King Curtis, then just 37, had reached the top after 25 years of hard work.

Yes, he was just 12 when he started playing the sax in his hometown of Fort Worth, Texas. One of his hometown peers was Ornette Coleman, the great jazz sax player who was four years older. Ousley’s first big gig came in Lionel Hampton’s band. At the time of his death, King Curtis had lived in New York for almost 20 years and had become one of its most highly regarded session men.

Early that year, Curtis and his band, the Kingpins, backed Aretha Franklin on her tour. In July, he did session work, solos, on two cuts on John Lennon’s “Imagine” album. Also that year, a new TV show needed a theme song, so he reworked his 1962 song “Hot Potatoes (Piping Hot)” as “Soul Train (Hot Potato)” and recorded it with the Rimshots.

His new album, “Live At Fillmore West,” was released in early August, a week before he came across the dudes on his stoop. It was recorded in San Francisco in the first week of March, at the same time as “Aretha Live at Fillmore West.”

“Memphis Soul Stew,” King Curtis, from “Live At Fillmore West,” 1971. It’s out of print but is available digitally.

King Curtis never lived to see this album become his biggest solo hit. It reached the top 10 on the Billboard jazz and soul charts and topped out at No. 54 on the Billboard Top 200 in the week after his death.

“Memphis Soul Stew” is just one of two original cuts on the record, which begins with that one and ends with “Soul Serenade.” Jammed in between are scorching and/or simmering covers of familiar tunes by Procol Harum, Led Zeppelin, Jerry Butler, Buddy Miles, Bobbie Gentry, Jerry Jeff Walker and Stevie Wonder.

All that scorching and simmering was performed and arranged by Curtis, yet seasoned by the mighty Kingpins. That all-star band included Billy Preston on organ, Bernard “Pretty” Purdie on drums and the formidable Memphis Horns.

The rest of the story: Juan Montanez, who was 26 at the time King Curtis was stabbed to death, was charged with second-degree murder. During his trial in February 1972, he agreed to plea to a lesser charge of second-degree manslaughter. He got seven years in prison and served almost six, the maximum possible with good behavior. He was released in December 1977. He hasn’t been heard from since.