Last night was the winter choir concert at Green Bay East High School. Our son Evan, a senior, sings bass in the concert and chamber choirs.

Each year, the concert closes with “Carol of the Bells.”

It’s a tradition at East for the choir alumni to join the combined choirs on stage for the final number, so you’re seeing them along with the Red Devil Chorale, Belles Voix, Concert Choir and Chamber Singers.

“Carol of the Bells” is a work built around “Shchedryk,” a traditional Ukrainian folk chant. Music was added more than 100 years ago, and lyrics added in the 1930s. Though often sung during the Christmas season, it’s actually a New Year’s carol. A variation dating to the late ’40s is known as “Ring, Christmas Bells.”

Here’s a folk guitar version that matches the elegance of the East singers’ performance. 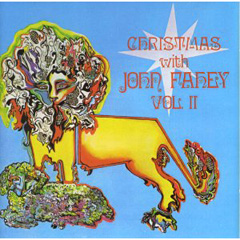 “Carol of the Bells,” John Fahey with Richard Ruskin, from “Christmas With John Fahey, Vol. II,” 1975. It’s out of print as such. However, all but one cut from that LP is available on the CD version of “The New Possibility: John Fahey’s Guitar Soli Christmas Album,” his great 1968 Christmas album. Also available digitally.

John Fahey’s music has been a part of our Christmases seemingly forever. I believe I bought “A New Possibility” in the early ’80s, most likely on a tip from Mike, the laid-back gent who ran — and still runs — Inner Sleeve Records in Wausau, Wisconsin. I don’t know how I otherwise would have found out about an obscure Christmas record from 1968.

Your Christmas music requests in the comments, please.