The record digging on vacation was nothing to write home about. Not sure why, but I’ve never had much luck when digging in Minneapolis.

Except at the fine Hymie’s Vintage Records, that is. It’s in the Longfellow neighborhood southeast of downtown. Hymie’s has thousands of records, carefully yet irreverently inventoried. Proof of that: 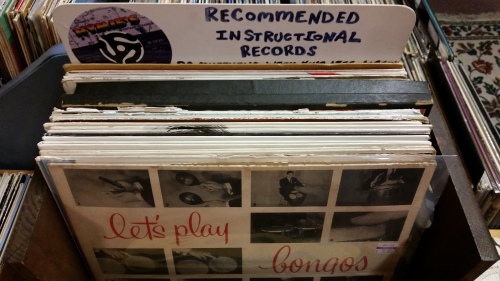 Along with “Make-Out Music” and “Awkward Chris†ian Records.” Sure, there are plenty of conventionally named bins. But you get the idea.

You never know what you’re going to find in these charmingly classified crates.

I looked through the “Sports” records and found a record that made my day. It was the only record I bought Monday — Hymie’s was the third and final digging spot of the day — and a $2 record at that. 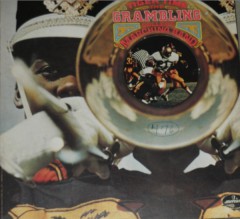 The name of the record is “Tiger Time,” on the Mercury label. This image, from Discogs, gives you an idea of what it looks like.

Mine once was “PROPERTY OF WTBU RADIO,” as scrawled all over the cover in thick black Magic Marker. Damn Boston University kids. Mine is a white-label promo copy with a clear sticker with recommended cuts at lower left.

From the liner notes written by Chester Higgins, a senior editor at Jet magazine:

“It is sometimes said that the half-time show — precision marching bands, shapely baton-twirling majorettes, and all the other hoopla — is better than some of the football games that sandwich them. If this observation has a ring of truth, measure it against the colorful Grambling (La.) College Marching Band, a 135-member, white-shoe, white-glove wearing, black-and-gold uniformed, high-stepping, stutter-stepping or ditty-bopping aggregation during any half-time show, dig the scintillating action they’re putting down and then draw your own conclusions.”

In 1971, Mercury took roughly half of the band — 65 members — into the studio and recorded these covers. They are every bit as tasty and upbeat and funky and soulful as you’d hope from one of the great show bands from one of America’s great historically black colleges.

“The Love You Save,” covering the Jackson 5 smash. 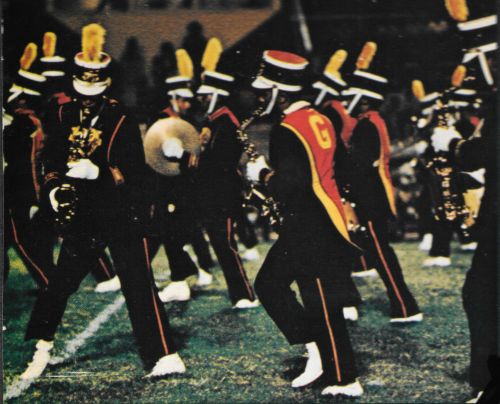 “Turn Back The Hands Of Time,” covering the Tyrone Davis smash. 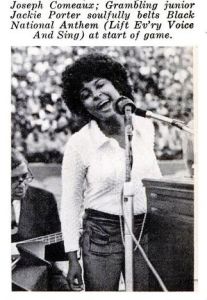 And now something less familiar but no less interesting.

“Same Thing,” covering a tune written and sung by Margie Joseph and released on the Volt label at the time, but never a hit for her.

It’s sung here by Grambling student Jackie Porter. This tremendous version was released by Mercury as a white-label promo for this LP. It’s on eBay if you want it.

All from “Tiger Time,” the Grambling College Marching Band, 1971. It’s out of print.