Everyone is missing someone today, on Thanksgiving. 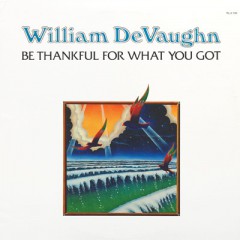 William DeVaughn had much to be thankful for.

He was a government employee, a draftsman who sang on the side. He wrote this in 1972. Its original title: “A Cadillac Don’t Come Easy.”

DeVaughn paid $900 to have his song recorded at a Philadelphia studio called Omega Sound. One of his producers, John Davis, was a session player with MFSB, the house band at Philly’s Sigma Sound Studios. Davis and co-producer Frank Fioravanti came up with a more sophisticated arrangement — the one heard here — and recorded it with members of MFSB at Sigma Sound.

Much of the rest of this LP has a gospel feel.

The records left behind

Sunday’s road trip took us to Madison, Wisconsin, where there are several fine record stores.

One of our stops was at Strictly Discs, not far from Camp Randall Stadium. It opened in 1988, when we lived in Madison. But I never went there back then because it was strictly a CD store, and I was one of those dinosaurs who still hadn’t switched from vinyl to CD.

Now, though, Strictly Discs has plenty of vinyl, with lots of nice used stuff in the basement. There, one of my record-digging rules came into play. If you see something you’ve never seen before, you ought to think about getting it.

Indeed, as I dug through the soul records in the basement, I came across two I’d never seen before. I inspected them, Googled them, pondered them.

Then I put the first one back.

Then, a tad more reluctantly, I put the second one back. 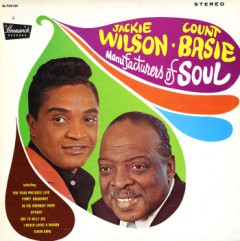 Jackie Wilson and Count Basie’s “Manufacturers of Soul,” with arrangements by Benny Carter, from 1968, on Brunswick.

Maybe another day. Each cost more than I usually spend on a record.

On this day, it seemed more important to set that money aside to buy lunch for Evan and the other college kids.

If I lose some of my record-digging cred, I’ll blame Dave Edmunds. Long one of my faves, he makes an interesting confession in the current issue of Mojo magazine.

“I don’t even have a record player at home any more. I’ve bailed out of playing albums because iTunes and YouTube are so convenient. With that predictive thing one track will lead on to the next. I find that exciting.”

So, no, I didn’t bring “Manufacturers of Soul” home from Madison yesterday. But that doesn’t mean we can’t give it a listen. Most of the covers on this great album are on YouTube, and that’ll have to do for now.

In which they cover Stevie Wonder’s “I Was Made To Love Her.” Dig that!

In which they cover Sam Cooke’s “Chain Gang.” Dig those trumpets and dig that Brunswick rainbow arrow!

Those TV themes of intrigue

Dang. We don’t get that channel in our corner of Wisconsin.

So I had to make do with the next best thing.

“The Horn Meets The Hornet,” a 1966 album full of TV theme songs by jazz trumpeter Al Hirt, was one of the first cool records I ever found while digging.

So I mentioned that record, found eight years ago, and Larry noted its cover of “Night Rumble.” Hm. Not familiar with that one. Turns out it was sort of a mod instrumental done in the spring of 1963 by a group called The Mark V and released as a 45 on ABC-Paramount. Here you go, my friend.

Of course, there also is that great “Green Hornet Theme,” which is Hirt’s take on Rimsky-Korsakov’s “Flight of the Bumblebee” as orchestrated by Billy May and conducted by Lionel Newman.

Among what the LP’s back cover bills as “TV Themes of Intrigue” are two other interesting but largely forgotten pieces by composers who wrote other, more familiar TV themes.

Hirt covers the theme from “T.H.E. Cat,” an NBC action drama that starred Robert Loggia. It aired only during the 1966-67 TV season. This muscular bit of mid-’60s jazz noir was written by Lalo Schifrin, who did the still-cool “Mission: Impossible” theme the same year.

He also covers the theme from “Run Buddy Run,” which aired for only the first half of the 1966-67 season. It’s written by Jerry Fielding, who’d done the “Hogan’s Heroes” theme the year before. “Run Buddy Run” was a CBS sitcom about a guy on the run from the mob, and Fielding’s theme plays it straight, reflecting that potential danger rather than going for laughs.

The star of “Run Buddy Run” was jazz trumpeter Jack Sheldon, but it doesn’t appear he played trumpet on the show’s theme.