Can’t you see? No, not really

Heard today that the Marshall Tucker Band will be playing our local vintage movie palace-turned-performance venue in a few weeks.

That show, on April 2, will come almost 40 years to the day since I saw the Marshall Tucker Band.

Well, sort of. The Marshall Tucker Band was on stage at the Quandt gym in Stevens Point, Wisconsin, on Friday, April 1, 1977. I was in the audience. I was 19. Many other details have been hazy ever since.

The Marshall Tucker Band was one of the biggest names in country rock, which itself was big at the time. They were at their peak, touring behind the “Carolina Dreams” LP and having just released “Heard It in a Love Song” as a single. Both the album and the single turned out to be their biggest hits.

It was a big deal that they’d play this small college town in central Wisconsin. Point was a half-hour’s drive south for us. When I say us, I can’t be more specific than that. Don’t remember who I went with.

We went to a house party before the show. I want to say it was a little house on Division Street, the main north-south drag in Point and just off campus. Someone knew some guys that lived there. Older guys, maybe seniors, maybe 23, 24, 25. Turned out to be way too much party for that 19-year-old kid.

Even so, I vividly recall sitting in the cluttered living room of that little house, really digging a Steely Dan record. It might have been “Countdown to Ecstasy.” That detail also has been lost to the haze of time. It’s proof, though, that I really must have been overserved. I never liked Steely Dan.

At some point, I was sure we needed to get over to the gym. Whoever I went with said, nah, we have plenty of time. So of course we were late.

This review of the show was from The Pointer, the student paper. It was written by a guy I met when we both transferred to college in Eau Claire that fall. Just about everything in his review is news to me, especially that it poured that night. 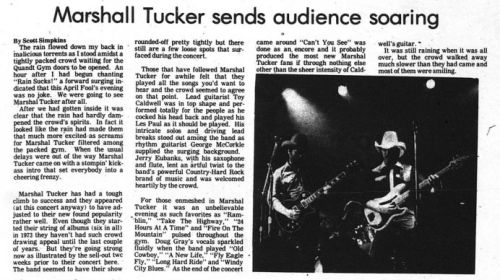 Turns out there was a mad rush to the seats. No wonder I wound up a million miles from the stage. One side of the Quandt gym has two tiers of bleachers. I found a spot along the front railing of the top tier, near an aisle. I sat and kneeled there as best I could.

There, my friends, is where the story fully fades into the haze of time.

Save for one detail. I never liked the Marshall Tucker Band, either.

Not when you could hear this fine piece of hippie country rock on the late-night free-form FM radio of the time.