Paul and John and Andy and Jeff

On Twitter today, a reminder of the power of a random meeting.

On this day 60 years ago, at a church picnic in Woolton, a suburb of Liverpool, 15-year-old Paul McCartney met 16-year-old John Lennon for the first time. They changed the world.

#OnThisDay in 1957 – John Lennon and Paul McCartney meet for the first time at a church garden fete in Woolton, Liverpool. pic.twitter.com/FO4cpcAiyx

Who had that kind of impact on your life? For me, it was the kid across the alley.

Late in the summer of 1966, my family had moved from a rental flat on the south side of Sheboygan, Wisconsin, to a rental home on the north side of town. We went from a neighborhood with few kids to a neighborhood that was full of them.

I’d just turned 9 that summer. The kid who lived across the alley, the kid who became my best friend for three glorious years in the late ’60s, was a year younger. Andy turned me on to sports.

We played baseball and football in our long back yards and basketball on the hoops in the alley between our houses. We were kids, so of course we also played baseball with a Superball, which was equal parts insane and tremendous. But we went down to the diamond with the high fence for that.

We collected baseball cards, then football cards as one season gave way to another. We’d stay home to watch the Packers with our dads in the early game on Sunday afternoons. Then we’d meet in the back yard to play our own game, then plop down in Andy’s living room to watch the late-afternoon AFL game.

By the time my family moved to another rental house on the south side of Sheboygan in the late summer of 1969, I was way deep into sports. Years later, another friend from that time said I was the most sports-crazy kid he knew. Guilty as charged, and no apologies.

Andy turned me on to sports, and it changed my world. So many of the good things that have happened in my life have happened because of sports.

When we moved back to the other side of town, I was 12 and Andy was 11. We did not see each other again for more than 45 years. We reconnected on Facebook, then in real life. We’re still in touch, Andy in Milwaukee and me in Green Bay.

Our paths have been remarkably similar. Both of us have had long careers in the media, Andy in broadcast, me in print. Both of us got into those careers through sports. Both of us are married with one child, and our kids are the same age. We look at the world in much the same way. We dig a bunch of the same things. 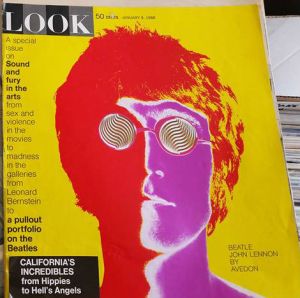 Which brings us back to the Beatles.

That is Richard Avedon’s portrait of John Lennon on the Jan. 9, 1968, cover of Look magazine. I bought it two years ago when my friend Jim threw open his garage for one of his record sales.

I posted my find on Facebook. Andy saw it that night.

“I have that same issue with Lennon on the cover,” Andy told me.

Whoa. Cue the final chord of “A Day in the Life.” 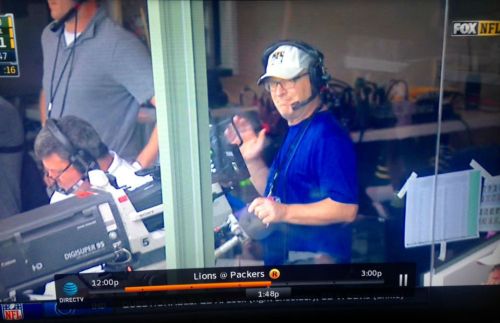 And say hi to my friend Andy, won’t you?