A Flock has landed again

It was there on Facebook for a flash, then gone as quickly in the scroll of the moment. When I thought to circle back and look for it, I couldn’t remember which of my follows had mentioned it, and the FB algorithms seemed to have rendered it invisible.

So I turned to Google and entered a most unlikely trio of search terms: “Flock of Seagulls” and “I Ran” and “orchestra.”

The combination of rock and symphonic sounds has always fascinated me, ever since spending three years playing standup bass in the grade school orchestra.

(A little story about that: As a 9-year-old fourth-grader in 1966, I chose the bass because I figured I wouldn’t have to practice because there was no way I could lug it home five blocks from school. I never imagined my parents could or would rent one to keep at the house. They did.)

Of course, we never played anything remotely close to rock. But once I heard the orchestration on the Beatles’ “A Day in the Life,” well, it was wonderful that such a thing was possible. Among my favorites when I got a little older: Pretty much anything by Electric Light Orchestra and Emerson, Lake and Palmer, with a little “Sabre Dance” by Dave Edmunds and Love Sculpture thrown in for good measure. I even went through a Rick Wakeman phase.

Fast forward to today, when I learned A Flock of Seagulls and the Prague Philharmonic Orchestra have teamed up to record new versions of some of the Flock’s most popular songs.

“Ascension” was released in July, but that was news to me. 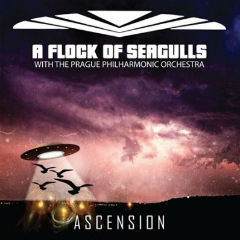 A Flock of Seagulls was one of my favorite groups in the early days of MTV. I gained more respect for them after seeing them live in the summer of 2006.

That summer, A Flock of Seagulls was the headline act in an ’80s nostalgia tour that played in Green Bay. The opening acts were When In Rome, Gene Loves Jezebel, Animotion and Tommy Tutone. Five acts playing a show that had to end at a specific time. Casino rules. The early acts ran long. One of the middle acts got pissy about it, complaining on stage about having to play a shortened set.

When it came time for A Flock of Seagulls, they were up against the clock, robbed of some of their stage time. Their crew set up as quickly as possible. The Flock played as many of the crowd’s favorites as they could in the time that remained. They never complained. Total pros.

“Twelve or so years ago we did a bit of a reunion, and that didn’t work out well for me,” he told Billboard magazine in May. He dabbled with a solo career in the wake of that tour but has always fronted A Flock of Seagulls, which has had 15 different lineups if its Wiki page is accurate.

Until “Ascension,” the four original members of A Flock of Seagulls — Mike Score, Ali Score, Frank Maudsley and Paul Reynolds — hadn’t recorded together since 1984. They really weren’t together for this one, either, save for a day spent shooting a promo video in Liverpool. They reworked their songs by email, sharing audio clips and then sending them to an orchestral arranger to assemble.

“What I heard sounded great. I would call it neo-retro-classical,” Mike Score told Billboard, laughing.

I agree. It sounds wonderful.

“I Ran,” A Flock of Seagulls with the Prague Philharmonic Orchestra, from “Ascension,” 2018.