Have a Harry Halloween, everyone

Here's a piece of Halloween trivia: this photo of Dad dressed as Dracula for the Son of Schmilsson record was taken by Michael Putland at George Harrison's Friar Park home 🦇 pic.twitter.com/EdbKWMHzVh

This is another of those records I’ve had forever.

“Nilsson Schmilsson,” its 1971 predecessor, was one of the first few LPs I ever bought. Thinking back, I probably bought it with Christmas money. I know it from front to back. Loved it then, love it now.

So of course when “Son of Schmilsson” came out in the summer of 1972, I bought it right away. Thinking back, I probably bought it with birthday money.

“Son of Schmilsson” fell right into a 15-year-old’s wheelhouse. I was a sophomore-to-be, and this record was sophomoric if nothing else. It’s full of irreverent and rude humor, lapsing into vaguely bad taste well before that notorious belch between songs on Side 2. Oh, yeah, I know this record from front to back, too. We had a lot of fun listening to “Son of Schmilsson” back then.

Listening to it now, though, and knowing how Harry Nilsson’s life unfolded — and of course, unraveled — it’s a little sad.

“It’s a deeply strange record, one which seems to be almost willful self-sabotage in places,” Mr. Andrew Hickey wrote this summer in a fine, must-read breakdown of “Son of Schmilsson” at his blog, Sci-Ence! Justice Leak!

That pretty much nails it.

So please enjoy the most elegant cut on “Son of Schmilsson,” a song that went unappreciated by a certain 15-year-old in 1972. All those years later, its poignant message hits home.

Long ago, far away / Life was clear / Close your eyes / Remember … 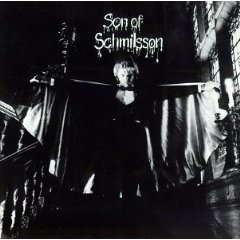 “Remember,” Randy Newman, from “For the Love of Harry: Everybody Sings Nilsson,” 1995.

The proceeds from this tribute record, which was released after Nilsson’s death in 1994, went to The Coalition to Stop Gun Violence. Nilsson became passionate about the cause after the shooting death of his friend John Lennon in 1980.

When a Gordon Lightfoot record you thought no one would ever want is the first record you sell, that’s a sign that it’s going to be a special day.

That was Saturday at the Green Bay Record Convention.

The picture above was taken just as the show opened. As it turns out, the picture was taken from the corner where I spent most of the day.

In baseball lingo, I’m the pinch hitter in our lineup. If the show sells out, I sit at the back door and work as a gofer. If the show doesn’t sell out, I’m comped a table so we’re full. On Saturday, one vendor didn’t show. After giving the missing vendor an extra hour, I opened for business at 11.

“This is really a cheap crowd,” the older guy at the next table said to me late in the day. He was new to the Green Bay show and its record diggers. His crates were a hodgepodge of genres, all seemingly priced by a guide. This gent didn’t have many bargains in his crates. It didn’t seem that he sold a lot of records.

Everything in my crates was marked down to $2, save for the stuff that was already marked down to $1. And, yes, I know full well that I should have charged more for some of my records. But that turned out to be the sweet spot. Our crowds tend to be bargain hunters. I’ve never sold so many records.

I no longer have any records by Commander Cody and His Lost Planet Airmen, nor any by the Blasters, Jerry Reed, Johnny Rivers or Cameo. Know them well. Just didn’t listen to them anymore.

My collection is down to three Elvis records, and two of them are still in my sale crates, having gone unsold on Saturday. Perhaps another day.

Once upon a time, I had all 14 of the J. Geils Band’s live and studio records. Now there are seven left. Kinda wish a couple of them hadn’t sold Saturday, but it’s time for someone else to enjoy them.

Which is where we’re headed. After Saturday, there are fewer than 1,000 records in my collection for the first time in a long time.

Downsizing is the plan going forward. Been thinking for some time now about getting my collection down to a more manageable, more enjoyable number. Let’s say 100 records. But that’s another post for another day.

For the record, so to speak: When last we gathered, I polled the crowd on whether I should go see an arena show with Bad Company and Cheap Trick or a theater show with Herman’s Hermits after the record show on Saturday. Thank you for your votes. But as it turns out, I did neither. We went to see our niece play hockey instead.

After Ringo, what’s next?

So anyway, we saw Ringo Starr and His All-Starr Band in Milwaukee last month.

Ringo is surprisingly elfin and nimble for a gent of 78. That’s him in the striped pants in front of the drum kit with the star on it. He bounced from center stage up a few steps to his drum kit and then back down and back up and back down with ease. Peace and love, everyone, peace and love.

The show was exactly as billed. A greatest-hits show by Ringo and his bandmates — Colin Hay from Men At Work (only Ringo got bigger cheers), Graham Gouldman from 10cc (a polite reception for his elegant songs), Steve Lukather from Toto (with a nod to those Weezer covers) and Gregg Rolie from Santana and Journey (“Oye Como Va” is still damn near a showstopper).

Of course, everyone was there to see and hear one of the Beatles. Ringo did not disappoint. Still irreverent, still cracking wise. Your favorite uncle sang his Beatles songs. Peace and love, everyone, peace and love.

Ringo opened with “Matchbox,” “It Don’t Come Easy” and “What Goes On,” noting that the latter was the only Beatles song credited to Lennon, McCartney and Starkey. “The credits should be reversed!” Ringo insisted, smiling. After one song each by his bandmates, Ringo did “Boys” and “Don’t Pass Me By.”

Then Ringo played “Yellow Submarine,” the 10th song of the show. After singing along like everyone else, I turned to Janet, smiled and said “OK, we can go now.”

But Ringo wasn’t done. There was “You’re Sixteen” (even the Ringo faithful at the show agreed it’s inappropriate now as then, and they’d prefer “No-No Song” to that) and “Anthem” (a polite reception for that one, too). “I Wanna Be Your Man” was dropped into the middle of a long set of songs by his bandmates.

The show wrapped with “Photograph,” “Act Naturally” and a wonderful sing-along medley of “With A Little Help From My Friends” and “Give Peace A Chance.” Peace and love, everyone, peace and love.

Which leads us to the question posed above. After Ringo, what’s next?

Update: Thank you for your votes. But as it turns out, I did neither of these things after the record show. We went to see our niece play hockey instead.

First time I heard Paul McCartney’s “Come On To Me,” maybe last week, it sure sounded familiar. Just couldn’t place it.

Heard it again this afternoon and finally put my finger on it. Sounded like a song from 30 years ago. Siouxsie and the Banshees’ “Peek-a-Boo.”

Not the first to think this …

Is it just me or does anyone else think that Paul McCartney 's new song sounds like "Peek a boo" by Siouxsie and the Banshees? At the very least it would make a good mashup.