Imagine seeing a photo of something you thought existed only in memory. As you try to process it, the whole thing takes your breath away. Then you catch your breath and settle down to scrutinizing the tiniest details of the photo. 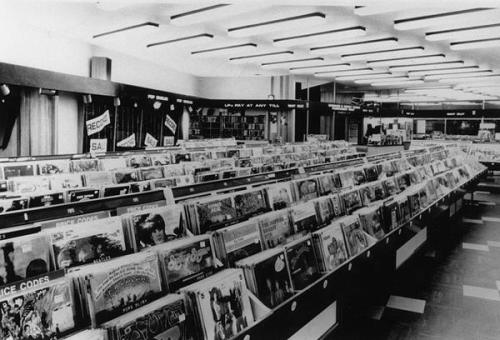 So it is with this photo, posted earlier this month by the Sheboygan County Historical Research Center to its Facebook page. It carried this four-word caption: “Record department. H.C. Prange.”

When I grew up in Sheboygan, Wisconsin, in the ’60s and ’70s, everyone went down by Prange’s. It was the biggest department store in that city of 50,000 along Lake Michigan.

The record department was in the basement. You went down the main escalator and there it was, over to your right as you stepped off, a dazzling world of colorful and thrilling LPs spread out before you. 45s? Sure, but those you could get at the neighborhood dime store. Prange’s was where you came to ponder the mighty LP.

This photo is from 1969 or later. In the row going up diagonally from the lower left corner are the Beatles’ “Revolver” and “Magical Mystery Tour” and the Archies’ “Sugar Sugar,” the latter released as an import in 1969. I’d love to see this photo at higher resolution so I could try to ID some of the other records.

I never bought a lot of LPs at Prange’s — all I had was paper route money, and not much of it — but what I did buy were among the first albums I ever owned. I still have them all.

— I gave Creedence Clearwater Revival’s “Cosmo’s Factory” LP to my friend Mike for his 13th birthday. It came out in July 1970. His birthday was in October. Truth be told, I’d wanted it for myself. Instead, I got Creedence’s “Green River,” which by then was a year old. It all worked out.

— Neil Diamond’s “Tap Root Manuscript,” released in November 1970. I also was 13 and had been listening to AM Top 40 radio almost non-stop all that year.

When I was 13, I was tempted by, perhaps even obsessed with, Janis Joplin’s “Pearl.” It had been released in January 1971, midway through my eighth-grade year. I liked the music. Mostly, though, I thought her pose on the cover was kind of hot — and, yes, I already had some sense of someone being a hot mess — and I really didn’t want to try to explain that to my parents.

So I never bought “Pearl” at Prange’s. Truth be told, it’s only been in the last 10 years that I finally bought “Pearl.” I’ve since bought three or four copies, always looking for a cover in a bit nicer condition than the one before.

Maybe I’ll even frame it someday. It tells quite a story about a young record digger, even if only he recognizes it.