Record digging — the actual physical act of flipping through bins of records — is just one of things you can’t do during the COVID-19 pandemic.

Our local record stores closed, then found ways to reinvent their business. The Exclusive Company in Green Bay, one of seven stores statewide, has turned to phone orders and curbside pickup. Rock N Roll Land, an indie, has turned to a Discogs online store, gift certificate sales and something creative and fun. 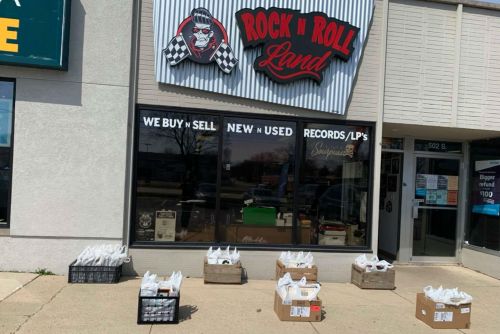 On Saturday, April 18, which would have been Record Store Day, my friend Todd from RNR Land posted this on Facebook:

The results were “awesome,” Todd said. Lots of people came out on one of the first really nice spring days in our corner of Wisconsin.

I missed out on that party — found out about it too late — but the results have been so awesome that Todd has continued to offer record grab bags. I stopped by last week to get a couple of them. Grabbed a couple from these crates just inside the front door. 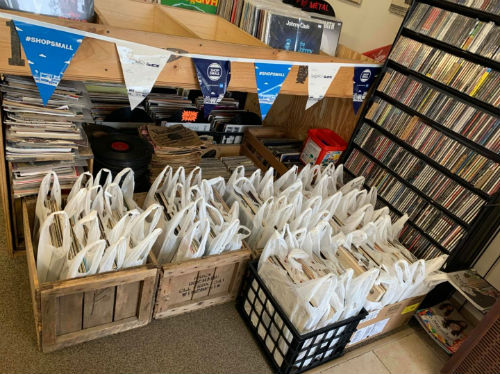 Do I need a couple of bags of records I’d probably never otherwise buy? No. Could my friend’s store use a little help? Yep. That’s what it’s all about.

So let’s dig through the grab bags!

How I grabbed it: I saw the last record through the white plastic bag — “24 Groovy Greats.” That can’t be all bad, I figured. It’s not.

Oldest record: “The Vikings” soundtrack by Mario Nascimbene from 1959. 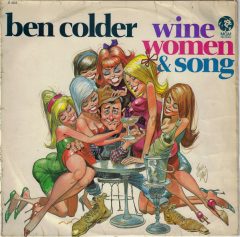 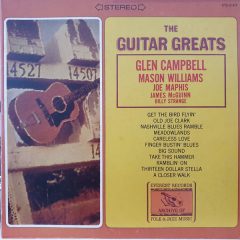 Found first: The first record in the bag is from 1965, an Everest Records comp of instrumental folk played by Wrecking Crew session guitarists — Glen Campbell, Billy Strange and Tommy Tedesco — plus Roger McGuinn (billed as James McGuinn) and Mason Williams.

“Ramblin’ On” by Roger McGuinn, recorded as James McGuinn in 1963.

“Thirteen Dollar Stella” by Mason Williams.  He later re-recorded it for “The Mason Williams Ear Show” LP in 1968 and released it as the flip side to his “Greensleeves” single in 1969.

Fun find: Dean Hightower is actually electric guitarist George Barnes, the jazz swing session legend, moonlighting in the Duane Eddy style popular in 1959. This was a one-off, not even mentioned on Barnes’ Wikipedia page. (I’ll go fix that.) Dig a couple of George Barnes originals!

How I grabbed it: Pretty much at random.

Oldest record: “Moondreams” by the Norman Petty Trio from 1958. 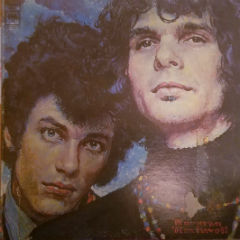 “Compared To What” by Roberta Flack.

Fun facts: The Norman Petty Trio song “Moondreams,” is listed as “Moonbeams” on the jacket. It’s not the version on which Buddy Holly sings and plays guitar. All the songs on Side 1 have “moon” in the title. All the songs on Side 2 have “dream” in the title. … There were two Righteous Brothers records in this bag — “Greatest Hits” from 1967 and “Give It To The People” from 1974. … There were two two-record sets in this bag. However, one is missing a record*. We have only half of “The Live Adventures of Mike Bloomfield and Al Kooper.” … The “Urban Cowboy” soundtrack is the other two-record set. Though “Hearts Against The Wind” is credited to J.D. Souther and Linda Ronstadt, it’s said to be mostly Souther and Ricky Skaggs duetting. Skaggs also plays mandolin. But, yes, Ronstadt is there, singing some of the harmonies. … The second-to-last record in the bag is a one-sided James Galway classical flute sampler/promo. On the back, it says: “Do not play this side. This is a silent groove to improve the molding of your pressing.”

What are you gonna do with time

John Prine and I went way back.

In the mid-’70s, I was introduced to his music by a guy who covered his songs. Pat Houlihan sang John Prine’s songs at The Office, an old tavern in Wausau, Wisconsin, right next to the fire station.

But we saw John Prine himself only once, in 2002. He played the big 2,000-seat theater on the UW-Green Bay campus. Our seats were on the main floor, but we were quite a ways back.

It was a good show, and it was great to see him, but I kinda felt like I had to share him with too many people. For a good 25 years before that night, it had always been just me and Prine hanging out in my living room with his records.

When it’s my time and I’ve gone, I hope they play a John Prine song so folks can smile. This song. The advance directive John Prine wrote way back in 1973. 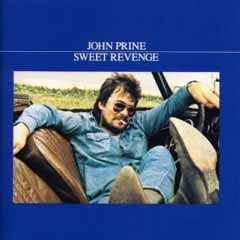 When my dad died almost three years ago, the funeral director asked me whether I wanted my dad’s watch. First, I thought, no. Dad never went anywhere without his watch. Then, I decided, yes. The funeral director handed me a small drawstring pouch with the watch inside.

The other night, John Prine put me at ease about that decision.

Embedded in one of the stories I read that night was the last song on his last record, “When I Get To Heaven,” from “The Tree Of Forgiveness,” which came out in 2018. I hadn’t heard it before, but it was as if it was me and Prine were hanging out in my living room again. Psst. Hey, buddy …

What are you gonna do with time / After you’ve bought the farm?

Couldn’t help but smile. John Prine had given me his blessing.

See, you don’t need that watch, Dad. One of the grandkids, or one of their kids, might like to have it someday. You know you’d like that.

Besides, don’t all the trains run on time now?