Four records at a time

It took a pandemic for me to listen to a bunch of my records. Not sure what that says about me, but there you go.

Staying home and socially distancing wasn’t too bad until the weather turned cold up here in Wisconsin and really kept us inside. So I just kept dropping record after record onto the turntable. No ripping to digital. Just let it go, man.

Four records make for a nice night of listening while surfing or writing.

Some records take me right back to where I found them, a nice memory.

Some records have startling moments. Those, I’ll circle back on and rip a little something from. Eddie Floyd’s “Down To Earth” LP was the first eye-opener. Then the scorching “Involved” by Edwin Starr. Then “Dreams/Answers,” Rare Earth’s rarely-seen debut LP. Then a couple of alternate Beatles takes from the 2017 re-release of “Sgt. Pepper’s Lonely Hearts Club Band.”

There you have it, four records.

Four records also make for a nice visual presentation when you post to Facebook or Twitter. If you follow me either place, you’ve seen a lot of them, especially this month for Black History Month. Today will make it 23 such posts — 92 records, all by Black artists — over 28 days and nights.

From the Black History Month social posts, some records that’ll get more spins:

— “Young, Gifted and Black” is by far the best Aretha Franklin record in my crates. That was a $1 record. Looked rough, played fine.

— Didn’t know about Johnny Adams, but, man, could he sing.

— Marvin Gaye’s “What’s Going On” has lost none of its punch.

— Definitely going back for seconds on the “Cleopatra Jones” soundtrack featuring Joe Simon and Millie Jackson. That was a $3 record found in a box on the floor at a record show in Indianapolis.

— Timmy Thomas got a lot of mileage out of that syncopated beat on “Why Can’t We Live Together,” which isn’t necessarily a bad thing. Found that at a record store that no longer exists.

There you have it. Eight records, two nights’ worth of listening.

When I spent a couple of nights listening to blaxploitation soundtracks last week, I circled back to the first record I ever wrote about here. I’m talking ’bout “Shaft.” 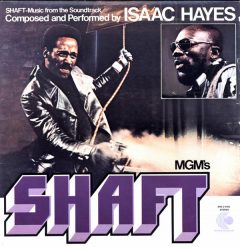 With that, we quietly mark 14 years here at AM, Then FM. Can you dig it?