They say it’s your birthday

An old friend has a birthday today, turning 39.

We were both new to town back in the second week of October 1982.

I’d moved to Madison in June, starting a new job at the Wisconsin State Journal. It was my first job at a morning paper. I worked nights, so I listened to WORT-FM, a local indie radio station, for a couple of hours each afternoon.

WORT had a highly eclectic music show on weekday afternoons, hosted by a different volunteer DJ every day. Mostly rock, but all genres, really. It was mind-blowing to a kid — I was 25, but really still a kid — who’d listened mostly to AM and FM Top 40 radio since the ’70s dawned. Sure, I’d heard late-night free-form FM radio, but this went far beyond deep album cuts. I heard things that would never make commercial radio, would never make MTV.

I wanted to explore some of that music, but where to find it? Who’d have records I’d never heard of? I’d been in town for barely three months. I certainly didn’t know all the record stores.

Then, 39 years ago today, on Saturday, Oct. 9, 1982, B-Side Records opened at 436 State Street, roughly halfway between the state Capitol and the University of Wisconsin campus. It remains there to this day.

B-Side was and is long and narrow, with bins on three sides of the store and some free-standing bins in the middle. It can be tight quarters. 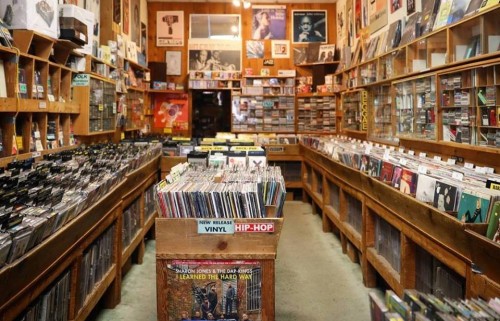 B-Side had some of the records I wanted to explore, so that was cool. It didn’t take long for B-Side to become one of my regular stops. (My other regular stops: Madcity Music Exchange near Camp Randall Stadium, run back then by my friend Dave Benton and still going as Madcity Music; and the late, great Resale Records near the Oscar Mayer plant, run by Eric Teisberg, a most quirky gent.)

I’m certain of one record, though. WORT introduced me to Los Lobos. When “How Will The Wolf Survive?” was released in the fall of 1984, I bought it at B-Side. Took it home, put it on the turntable … and it didn’t track properly. I took it back. I got puzzled looks at B-Side, but they exchanged it for another copy … which didn’t track properly, either. I took it back. Now they’re really skeptical, and understandably so, but they graciously exchanged it for another copy … which played perfectly.

Other records I know I bought at B-Side: All my Prince, Eurythmics, Bananarama and Rainmakers records from that time. Records by Rank and File, the Del-Lords and Brave Combo, all heard on WORT. Message records from that time, including “Free Nelson Mandela” by The Special AKA and “Sun City” by Artists United Against Apartheid. Records from oldies acts that enjoyed new-found popularity back then, including “Reconsider Baby” by Elvis Presley (a blues comp on blue vinyl, a record I love), “Milestones,” a Jerry Lee Lewis comp, and “Little Richard’s Grooviest 17 Original Hits.”

I’m headed to Madison next week for a day of digging. I’m sure I’ll stop by again.

Photo credits: Exterior photo is from B-Side Records Facebook page, May 31, 2020. Interior photo is by David Drexler, taken in the fall of 2017, pinned to B-Side’s Facebook page and shared by B-Side owner Steve Manley to the Badger Herald student newspaper, February 2020.

2 responses to “They say it’s your birthday”