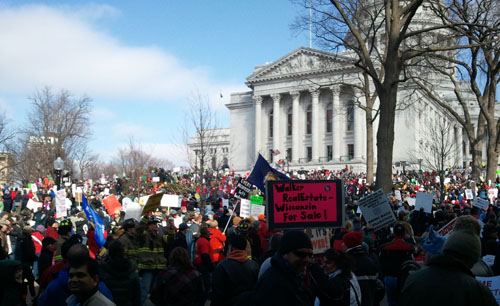 We went to Madison, Wisconsin, on Saturday to witness the scene on the Capitol Square, where more than 70,000 people — perhaps closer to 100,000 people — took part in a loud but peaceful demonstration of union solidarity.

It came in the wake of the state Republicans’ vote to strip public workers of their collective bargaining rights. It capped almost a month of protests.

All along the way on Saturday, it seemed as if we were following in the footsteps of those who had gone before us.

The drive down took us within a couple of miles of the tiny rural cemetery where my great-great-grandparents are buried. William Burgraff arrived in Wisconsin from Germany in the early 1850s and went to work as a barrel maker. Without William’s journey, we don’t make ours.

So many people converged on Madison that we had to park a good distance away from the Square. We found a spot on the east side (not far from the Crystal Corner Bar, if you know Madison), and walked more than a mile downtown.

We walked on the Capital City Trail, an old rail corridor. During World War II and again in the early ’50s, my dad worked on those rails, handling freight on Chicago & North Western passenger trains. During the war, Dad lived in a rooming house (also not far from the Crystal Corner Bar) and walked to work at the depot. Without Dad’s journey, we don’t make ours.

When we reached the Square, we made our way through the sea of people, onto the Capitol grounds and up to the Capitol so my companions — two 16-year-old high school sophomores — could get a better view of the scene. From there, we walked down to Mifflin Street and waded back into the sea of people, walking in the march for one more block. Here is 30 seconds of that experience.

When we reached the corner, I looked down State Street. It seemingly was filled with people all the way down to the University of Wisconsin campus, which sits at its west end. In the late ’60s and early ’70s, antiwar protesters marched from the campus to the Capitol. Without their journey, we don’t make ours.

On a day of continuous rallies started in the morning by the farmers’ tractorcade, the crowd was getting revved up for the biggie, the 3 p.m. union rally.

But our day was almost done. Were it my trip alone, I would have spent a couple of hours soaking in the scene. Given that my companions’ interest didn’t match mine — which I get — we kept it to one trip down State Street and back up to the Capitol, and one lap of the Square.

From a day when the sights were so extraordinary, the sounds will linger. We heard this classic song, its reminder of a class war sadly still timely. 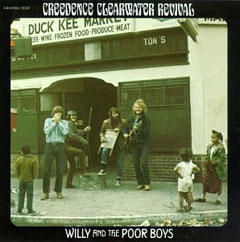 As we walked away from the Square, we heard this song behind us. Wishful thinking, for obvious reasons.

We didn’t hear this one, but for a day on which we walked into history — representing three generations of family members who have included union teachers, union social workers, union railroad workers and a union carpenter — it also seems appropriate.

Both of my grandfathers were union activists who in the 1920s pushed for a 40-hour work week instead of a 48-hour week. They wanted workers to have two days off. Without their journey, we don’t make ours.

I also will long remember the sound of the tens of thousands of people at that late-afternoon rally.

We were more than a half-mile from the Square, headed back to the car.

We still could hear the roars.