In search of George Harrison

We don’t have HBO, so I didn’t have an opportunity to see the Martin Scorsese documentary on George Harrison when it aired last October. I’d heard good things about it, but knew I’d have to see it another day, another way.

About a month ago, a most unexpected second chance came along.

A publicist, a most rare cat who understands what goes on here at AM, Then FM — “I recall what you cover and what you do not” — offered a review copy of “George Harrison: Living In The Material World.”

So over the course of a couple of nights — the film is spread over two DVDs and runs 3 hours, 47 minutes — I sat down to watch and listen. Some thoughts:

« Having grown up in the time of the Beatles and having come of age in the time after the Beatles, this is a familiar story. There weren’t many revelations, at least for me. A younger person will see it differently. Regardless, the film is exceptionally well done, thorough and thoughtful.

« The first disc, which runs 1 hour, 34 minutes, stands alone nicely as a history of the Beatles filtered through the prism of Harrison’s experience. It ends, appropriately, with the story behind “While My Guitar Gently Weeps.”

« It’s interesting to be reminded of how Harrison got into movies, footing the bill to make the Monty Python troupe’s “Life of Brian” in the late ’70s. Less interesting, almost immediately, is a digression into the controversy over the film, which was seen by some as blasphemous.

« Harrison’s spiritual quest is a fascinating thread woven throughout the film. His widow Olivia, who co-produced the film, provides an astonishing account of the scene at his passing in November 2001.

« The music in the film — and there is plenty of it — brought a bittersweet realization. My knowledge of George Harrison’s music is wide but shallow.

I know all of the hits, from the Beatles to his solo years to the Traveling Wilburys. But some of the songs in this film, no doubt familiar to many of you, were new to me. I somehow have missed out. I need to go out and buy some more George Harrison records. Your recommendations are welcome. 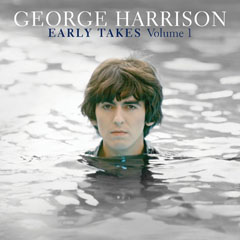 The film’s companion CD is a start, and for that I am grateful. It features seven demos and three early takes of Harrison’s songs, all never before released. This is one, a demo prominently featured in the film for obvious reasons.

At 4:40, this demo version is almost a minute longer than the finished version on the LP of the same name.

Full disclosure: I received copies of the film “George Harrison: Living In The Material World” and the music CD “George Harrison: Early Takes, Volume I.” for review purposes. I promised only to watch and listen. I did not promise, nor was I asked, to say nice things.

4 responses to “In search of George Harrison”