Those TV themes of intrigue

Dang. We don’t get that channel in our corner of Wisconsin.

So I had to make do with the next best thing. 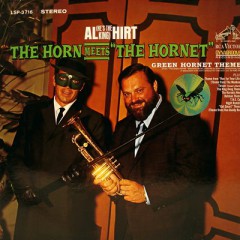 “The Horn Meets The Hornet,” a 1966 album full of TV theme songs by jazz trumpeter Al Hirt, was one of the first cool records I ever found while digging.

So I mentioned that record, found eight years ago, and Larry noted its cover of “Night Rumble.” Hm. Not familiar with that one. Turns out it was sort of a mod instrumental done in the spring of 1963 by a group called The Mark V and released as a 45 on ABC-Paramount. Here you go, my friend.

Of course, there also is that great “Green Hornet Theme,” which is Hirt’s take on Rimsky-Korsakov’s “Flight of the Bumblebee” as orchestrated by Billy May and conducted by Lionel Newman.

Among what the LP’s back cover bills as “TV Themes of Intrigue” are two other interesting but largely forgotten pieces by composers who wrote other, more familiar TV themes.

Hirt covers the theme from “T.H.E. Cat,” an NBC action drama that starred Robert Loggia. It aired only during the 1966-67 TV season. This muscular bit of mid-’60s jazz noir was written by Lalo Schifrin, who did the still-cool “Mission: Impossible” theme the same year.

He also covers the theme from “Run Buddy Run,” which aired for only the first half of the 1966-67 season. It’s written by Jerry Fielding, who’d done the “Hogan’s Heroes” theme the year before. “Run Buddy Run” was a CBS sitcom about a guy on the run from the mob, and Fielding’s theme plays it straight, reflecting that potential danger rather than going for laughs.

The star of “Run Buddy Run” was jazz trumpeter Jack Sheldon, but it doesn’t appear he played trumpet on the show’s theme.

One response to “Those TV themes of intrigue”