50 years ago, at about this time of year, Isaac Hayes’ “Theme From Shaft” blew my 14-year-old mind.

As the first week of November 1971 came to a close, “Theme From Shaft” sat atop the Top 10 on WOKY, The Mighty 92 out of Milwaukee, one of the last great AM Top 40 stations. I listened to it every night. That Top 10:

“Theme From Shaft” was in its second week at No. 1 on WOKY, so you know it was in heavy rotation, getting spun every three hours or so. No complaints here. 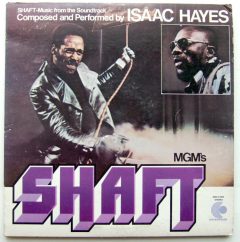 The “Shaft” soundtrack was perhaps only the third album I ever bought. At the time, late 1971, it had the feel of being my first really sophisticated record. I wonder what my parents thought. I never asked. They never said.

Yes, I still have it.

I also have a bunch of “Shaft” covers, “Shaft” knockoffs and “Shaft” oddities.

My favorite Shaft-adjacent collectible is “The Man From Shaft,” by “Shaft” star Richard Roundtree. I found it maybe 15 years ago at one of the first record shows I ever went to. I grabbed it and I haven’t seen it in the wild since.

Eugene McDaniels produced and arranged this LP and wrote or co-wrote all eight of the nine cuts. There’s a tremendous group of jazz session musicians on it, too.

I have a bunch of covers of “Theme From Shaft.” Among those artists: El Michels Affair, Jimmy McGriff, Joe Bataan, Maynard Ferguson, Sammy Davis Jr., and Ike and Tina Turner. Still looking for the LPs with “Shaft” covers by Bernard Purdie and the Love Unlimited Orchestra.

You know what that sounds like, but here’s one of my favorite covers. It’s by Kashmere Stage Band from Kashmere High School in Houston. They don’t sound like high school kids.

Finally, there is this. Did you know Isaac Hayes recorded a follow-up to “Theme From Shaft?” Well, of course he did, and of course it’s a long jam.

All that, and we still haven’t gotten to the film. More to come.